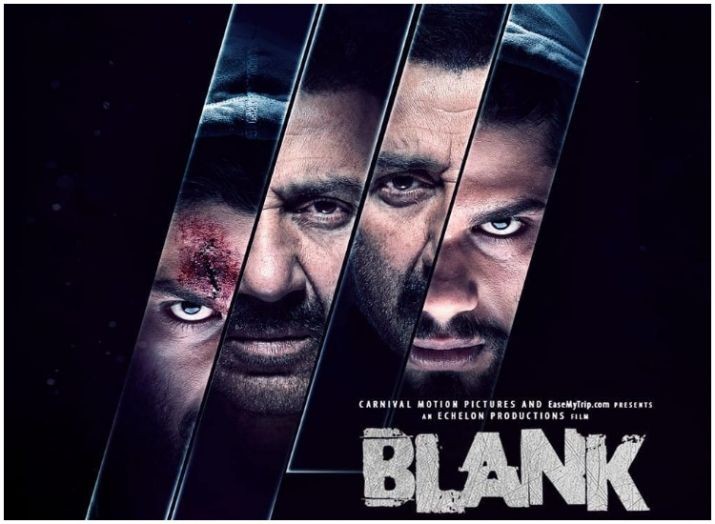 BLANK is directed by Behzad Khambata, introducing Karan Kapadia in the lead role. Karan Kapadia’s debut movie BLANK along with Sunny Deol is a good watch. Based on the tale of seeking revenge for his father’s assassin, a son goes to the extremes. The first half of the movie is a bit slow and takes time to build the setup. One can’t kill him nor can defuse the bomb. Actor Sunny Deol, like always carried himself.

The first half of the movie is a bit slow and takes time to build the setup. The movie opens with Karan Kapadia handcuffed, knelt down on a deserted land at the gunpoint target of the cops. This makes us wonder and rethink what actually might have happened. Karan Kapadia urf Hanif in the movie has a bomb implanted on his chest which is directly connected to his heartbeats. One can’t kill him nor can defuse the bomb.

Actor Sunny Deol, like always carried himself with all the grace, valor and authority. There’s nothing that Sunny can’t do and it’s well portrayed in the movie.  Sunny Deol urf S.S. Deewan, the A.T.S chief burns his blood and fuel to save the city from the terror(bomb) attack.

A group of terrorists in the name of religion and to seek a place in heaven has planted bombs in 25 human beings. They have made those people, a mere puppet, who function as per the demand of the terrorists. Also, the sudden flow of HMX, which is more powerful than RDX made Sunny Deol remain on the wheels with his team which included actors Karanvir Sharma and Ishita Dutta.

Sunny Deol is a dedicated ATS chief who worships his duty and Nation like his first love. He does his best to hunt the team of terrorists and fail all their planning. Karan Kapadia is seen in a very strong role. He is termed as ‘Dead Man Switch,’ and is seen thrashing whosoever comes in front of him. He is shown as the difference between the evil and the good. Karan’s character highlights the pain of a helpless man in need. The tortures and struggles of life have turned a commoner so harsh that he seeks revenge from the people in power.

Besides them, Jameel Khan is playing a strong role in the head of the terrorist group. For him, everything is business, even the lives of people.Though the movie does not highlight a new theme, yet the surprise elements and climax of the movie are worth the wait.

The music of the movie isn’t impressive at all. However, you get to see a cameo number by Akshay Kumar and Karan Kapadia, ‘Ali Ali’ at the very end of the movie.