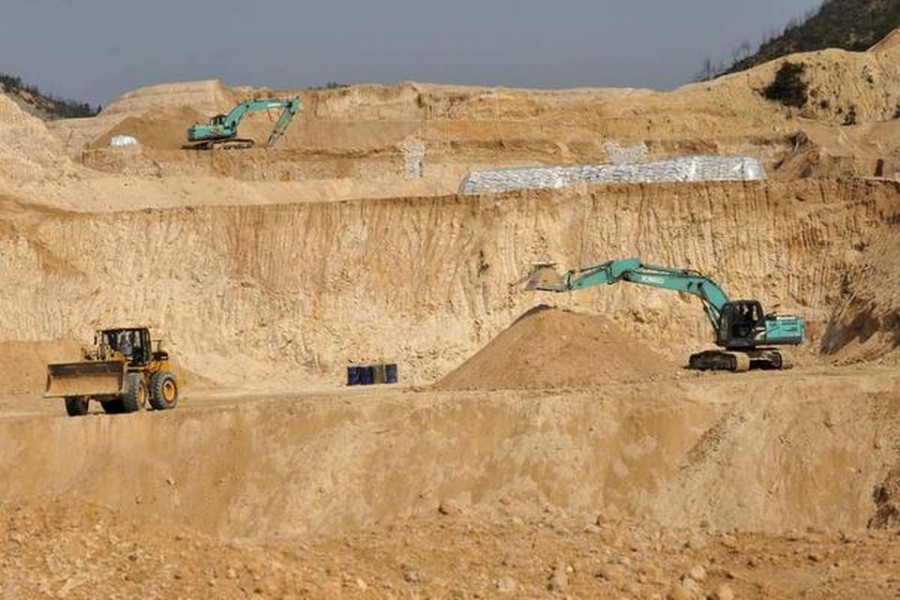 Facing new trade sanctions and a U.S. clampdown on its top telecommunications company, China issued a pointed reminder Wednesday that it has yet to unleash all its weapons in its trade war with the Trump administration.

Chinese state media warned that Beijing could cut America off from exotic minerals that are widely used in electric cars and mobile phones. The threat to use China’s rich supply of so-called rare earths as leverage in the conflict has contributed to sharp losses in U.S. stocks and sliding long-term bond yields.

For months, the world’s two biggest economies have been locked in a standoff over allegations that China deploys predatory tactics including stealing trade secrets and forcing foreign companies to hand over technology in a drive to supplant U.S. technological dominance.

The Trump administration has imposed 25% tariffs on $250 billion in Chinese imports and is planning to tax the $300 billion in imports that have so far been spared. And it escalated the stakes this month by putting the Chinese telecom giant Huawei on a blacklist that effectively bars U.S. companies from supplying it with computer chips, software and other components without government approval.

The U.S. claims Huawei is legally beholden to China’s ruling Communist Party, which could order it to spy on their behalf. Washington has offered no evidence that the Huawei has done that, however.

An attorney representing Huawei in the U.S. case, Glen Nager of Jones Day, asserts that Congress alone cannot constitutionally impose punishment on an individual company which the punitive law does in singling out Huawei by name.

The law “is intended to drive Huawei out of the U.S. i.e., to banish it,” Mr. Nager argued. It “stigmatizes Huawei as a tool of the Chinese government” with no right to a fair hearing, he added.

Steven Schwinn, a professor at John Marshall Law School in Chicago, suggested that Huawei’s arguments fall short constitutionally, and “given that this relates to national security, we can expect the courts to be fairly deferential to the government.”

The nationalistic Chinese newspaper Global Times warned that China has plenty of ways to retaliate against the United States, including the threat of cutting off supplies of rare earths. China last year produced 78% of the world’s rare earths, according to researchers at Bank of America Merrill Lynch.

If the U.S. fails to exercise restraint, it will see that “China is far from running out of cards, and we have the will and determination to fight the U.S. to the end,” the paper’s editorial said. An official of China’s top economic planning agency did not rule out using rare earths as a countermeasure against “the U.S.’s unwarranted suppression.”

China has used rare earths as a cudgel before. Five years ago, the World Trade Organization slapped down China’s attempt to restrict the export of rare earths, rejecting its claim that it just wanted to protect the environment and conserve supplies. Instead, the move appeared to be aimed at hurting Japan with which Beijing was having a diplomatic tiff.

Scott Kennedy, director of the project on the Chinese economy at the Center for Strategic and International Studies, said the Chinese might benefit even less if they try to weaponize rare earths again.

“It’s not the threat that it was ... when the Chinese threatened to cut off the Japanese,” he said.

First, users of rare earths have stockpiled the minerals for a “rainy day.” Second, they also have figured out how to “use less rare earth to achieve the same results” in such products as lasers and magnets. And third, different minerals and chemicals are increasingly being used as rare earth substitutes.

Mr. Kennedy predicts that once investors have “realized the threat wasn’t as dire, markets would bounce back.”

Still, he isn’t optimistic about the U.S.-China trade negotiations, which broke off May 10 after an 11th round of talks failed to produce an agreement. U.S. officials accused the Chinese of reneging on agreements they’d made in earlier rounds.

“The Chinese first are going to have to signal they will talk,” he said. Then they will have to go back to where they stood before they backpedaled on earlier concessions. “I don’t see any body language from the Chinese that they’re about to do that,” Mr. Kennedy said.