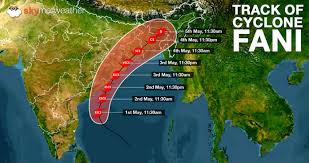 Odisha CM office: More than 1 million people have been evacuated from the vulnerable districts in last 24 hours. Ganjam and Puri evacuated more than 3 lakh and 1.3 lakh people respectively to safe shelters. About 5000 kitchens started operating to serve people in the shelters.

Cyclone Fani expected to hit West Bengal at 8:30 pm tonight. Kolkata airport to halt operations from 4 pm . No flights will land or take off from Kolkata airport between 4 and 9:30 pm, May 3 to 6pm, May 4.IMD Hyderabad: Winds in Puri, Odisha are blowing at a maximum speed of 240-245 km per hour and heavy to very heavy rains are continuing over the Odisha coast. After landfall, the impact is likely to reduce and it is likely to move towards West Bengal coast.

West Bengal CM Mamata Banerjee to stay in Kharagpur, near the coastal belt and monitor the situation herself, today and tomorrow. Mamata Banerjee cancelled all her election rallies on Friday in the wake of Fani cyclone. The same has been suggested by the Indian Metrology Department. After landfall, the impact is likely to reduce and it is likely to move towards West Bengal coast.

Three Indian navy's warships -- Sahyadri, Ranvir and Kadmatt -- with relief material and medical teams are tracking extremely severe cyclone Fani and will be the first responder and start rescue work as the storm hits the coast in Odisha.

The ship sailed south of the cyclone to be able to start rescue operations even as other naval vessels remain on standby at Vishakhapattanam. Naval divers teams have also moved to Odisha from Vishakhapattanam.

Cyclone Foni hit the Puri coast in Odisha at 9:30am on Friday. As per Indian Meterological Department officials, the cyclone has hit with the speed of 175 km/hr.

Several areas are also witnessing heavy rainfall; while gusty winds uprooted trees and electricity poles, officials said. The cyclone moved close to north coastal Andhra before it made landfall in neighbouring Odisha. The electricity has been disconnected in Puri and several other areas.

The landfall process of extremely severe Cyclone Fani began nearly at 8 am Friday close to Puri in Odisha, with the area recording a wind speed of 145 kilometres per hour, the IMD said. Mritunjay Mohapatra, in-charge of the Cyclone Warning Division of the India Meteorological Department, said the process of landfall will continue for the next three hours. The area along Puri is witnessing winds with a speed of 145 kilometres per hour that could reach up to 180-200 kmph, which could bring an extensive damage", he said.

A cyclone making a landfall implies that the first arm of the cyclone has reached the land. The eye of the cyclone, which is calm, is nearly 30 kilometres.Puri and neighbouring areas are experiencing wind with a speed of 175 kilometres per hour which may go up to 200 kmph.

Under the impact of the cyclone, high velocity wind is sweeping across several coastal districts like Ganjam, Puri, Khurda and Gajapati, Special Relief Commissioner (SRC) B P Sethi said.

Nearly 11 lakh people have been evacuated from vulnerable and low-lying areas of at least 11 coastal district, he said, adding the evacuees have been accommodated in over 4,000 shelters, including 880 specially designed cyclone centres.

No casualty has so far been reported from any part of the state, Sethi said adding the government is fully prepared to deal with any eventuality.