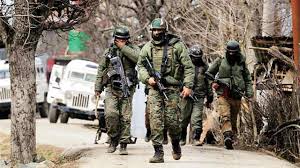 Two militants have been killed in an ongoing encounter after firing resumed between militants and security forces in Adkhara area of Imam Sahib in south Kashmir's Shopian district.

As per official sources, two militants have been killed after contact was established with the militants in hiding.

Earlier, a senior police officer said that some gunshots were heard when forces intensified searches towards the suspected spot.

Meanwhile, during the gunfight, one army man was injured and has been evacuated to army base hospital in Srinagar.

Mobile internet services have been snapped in south Kashmir by the authorities as a precautionary measure.

The area has been put under cordon and further details were awaited, the official said.