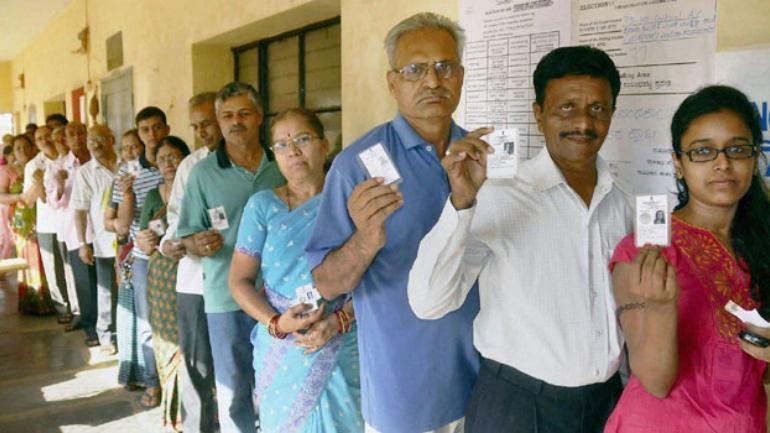 Polling in the fifth phase of the Lok Sabha elections 2019 began at 7 am on Monday across 51 constituencies. Today's polling will determine the fate of 674 candidates.

The fifth phase will witness key battles in the Congress party stronghold of Amethi and Raebareli; 12 other constituencies in Uttar Pradesh will also be a part of the fifth phase.

Voting also commenced across 12 parliamentary constituencies in Rajasthan, seven seats each in West Bengal and Madhya Pradesh, five seats in Bihar and four in Jharkhand. In Jammu and Kashmir, polling will be held in Ladakh constituency and Pulwama and Shopian districts of Anantnag seat.

In Bikaner, the contest is between Union minister Arjun Ram Meghwal and Congress candidate Madangopal Meghwal, who is a former IPS officer. Two seers - Sumedhanand Saraswati and Baba Balaknath are also contesting the polls from Sikar and Alwar respectively.

Seven key fights will also be witnessed across three districts in West Bengal and it will be a four-cornered contest between Mamata Banerjee's Trinamool Congress (TMC), BJP, Congress, and CPI(M). The Trinamool Congress had won all seven seats in 2014 but the BJP is expected to eat into its vote share this time around.

In Bihar, where five seats are going to polls today, Hajipur and Saran are considered the pocket boroughs of the Ram Vilas Paswan's Lok Janshakti Party (LJP) and Lalu Prasad's RJD respectively. The three other constituencies are Muzaffarpur, Sitamarhi and Madhubani.

Meanwhile, BJP's Rajnath Singh will be seeking a re-election from Lucknow; he is going up against Samajwadi Party candidate Poonam Sinha and Congress's Pramod Krishnan.

The BJP will be hoping for a repeat of 2014, when it had secured a victory in 40 of the 51 seats that are witnessing polling. On the other hand, the Congress party had secured just two of the total seats that went to polls today.

Election commission of India (EC) has set up at least 94,000 polling stations for the fifth phase of Lok Sabha elections and adequate security arrangements have been made. Polling stations in some constituencies have already started witnessing healthy voter turnout since voting started at 7 am.

With the fifth phase, elections will be over in 424 states and polling for the remaining 118 seats will be held on May 12 and 19.