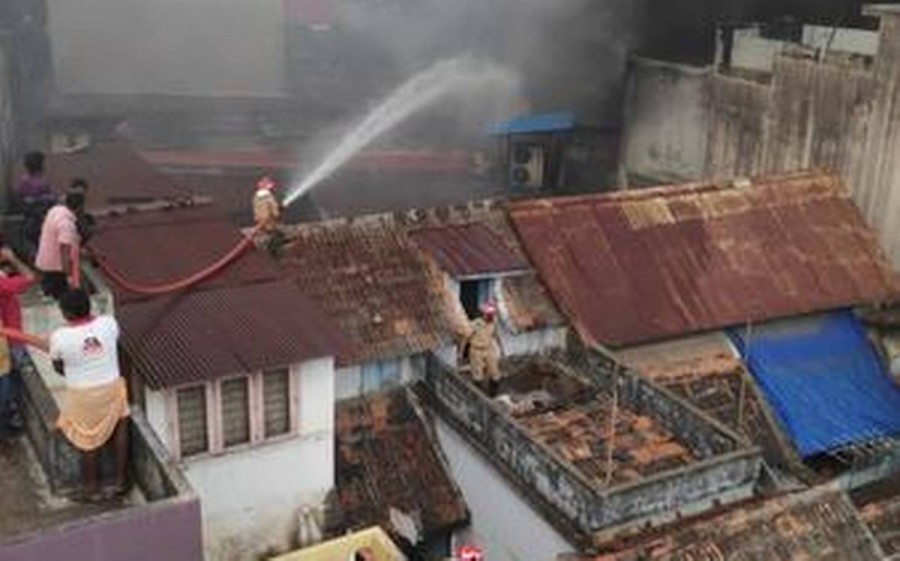 Triggering panic in the State capital, a major fire broke out in the commercial hub in the East Fort region on May 21.

The fire was reported from a shop-cum-godown of mattresses, umbrellas, bags and other items on the Power House Road at around 9 a.m. after traders nearby detected black smoke emanating from the building.

Shortly, the Kerala Fire Rescue Services deployed five fire tenders to the spot. While they were able to douse the fire on the front side of the building that faced the M.G. Road, bringing the fire under control on its rear side was a daunting task.

The narrow roads between the crammed buildings in the area that formed part of the East Fort heritage zone appears to have complicated the ongoing fire fighting efforts.

With the police having evacuated residents from the houses in the vicinity, the fire force personnel are currently engaged in preventing the fire from spreading to the other buildings.

Kerala Fire and Rescue Services Director (Technical) R. Prasad said that most of the buildings in the East Fort region, including the one that was gutted today, failed to satisfy fire safety norms.

While a fire audit had been conducted in the area a year ago, following a fire break out near the Sree Padmanabhaswamy Temple, most commercial establishments were served notices by the district administration. However, almost all erring establishments have failed to rectify the inadequacies, Mr. Prasad told The Hindu.

As many as 32 fire tenders, including one deployed from the Thiruvananthapuram International Airport, and over 200 fire fighters were involved in the operation.

The situation is currently under control. The actual cause of the fire was yet to be ascertained, the senior officer said.

Local residents claimed to have seen the employees of the shop burning waste outside the building last evening. Two fire force personnel were injured.