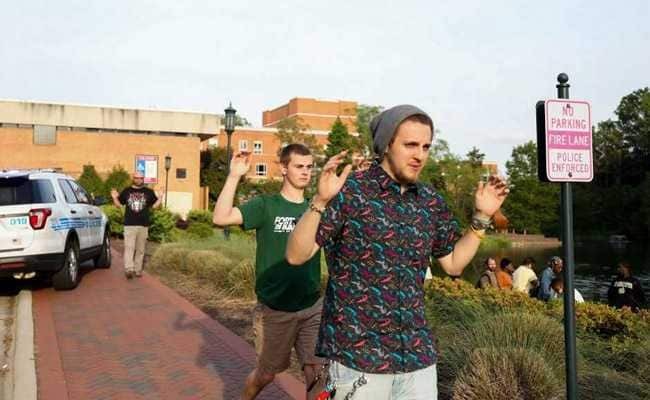 Two people were killed and four others were injured after shots were fired Tuesday at the University of North Carolina at Charlotte. It was the last day of classes for the school year, one that many students had expected to finish off with a concert, but that ended with gunfire and barricades. Two people were found dead at the scene, according to a Mecklenburg Emergency Medical Services Agency post on Twitter.

It was the last day of classes for the school year, one that many students had expected to finish off with a concert, but that ended with gunfire and barricades.

"Unbelievable grief," Jeffrey Baker, chief of the University of North Carolina at Charlotte Police & Public Safety agency, said at a news conference Tuesday night, "that this - came to our campus."

It was a situation campus police had trained for, just as officers do at colleges across the country at a time when such shootings feel all too frequent. Baker said his officers responded swiftly and were able to stop the suspect. "Our officers' actions definitely saved live," he said.

Baker said officers were able to get quickly to the building where the shooting happened because they already were converging for a Waka Flocka concert on campus.Two people were found dead at the scene, according to a Mecklenburg Emergency Medical Services Agency post on Twitter. Three people were in critical condition, while a fourth person was not, Baker said.

One suspect was in custody, and there was no reason to believe other people were involved in the shooting, the Charlotte-Mecklenburg Police Department announced Tuesday evening.

University officials warned the campus Tuesday evening of shots being fired and urged people to "Run, Hide, Fight." Campus buildings were locked down.

Amando Chavez, 18, said he was in a film class with about 30 other students when another student entered the classroom and told the professor a shooter was on campus.

The class was in Cameron Hall, a few buildings from where the shooting unfolded, so the students decided to make their way to the student union. They walked single-file, down a hill together, as police cars sped in the opposite direction, said Chavez, a Charlotte native.At least a few hundred students crowded into the student union, Chavez said. Some students cried but, for the most part, he said it felt "like a normal high school lockdown." He texted his parents every 5 minutes, letting them know he was safe.

Police released him and other students about 8 p.m., he said.

"I'm kind of shocked," he said. "It's been so peaceful and quiet, you wouldn't expect this here."

University officials said shots had been reported near the Kennedy building, one of the first structures to be built on campus and now home to administrative offices.

A spokesman for the City of Charlotte referred questions to campus police Tuesday evening.

Shortly before 8 p.m., police were still searching each room on campus to find people sheltering in place.

Shortly before 9 p.m., university officials said they believed there was no ongoing threat, but that people should remain sheltered in place unless told otherwise. "Anyone in a building should be prepared to identify themselves to police and follow officer commands. Anyone outside on campus should move to the front of his or her residence hall, move to the front fields by the main entrance, or depart campus. All others are advised to remain away from campus until an all clear is issued.

"We are devastated to learn of the act of violence that occurred earlier on the campus of UNC Charlotte, and our thoughts and prayers go out to the victims and their families," UNC Board of Governors Chairman Harry Smith and UNC System Interim President Bill Roper said in a joint statement Tuesday night. "The University of North Carolina System stands in solidarity with UNC Charlotte and stands ready with assistance for the students, faculty, and staff affected."