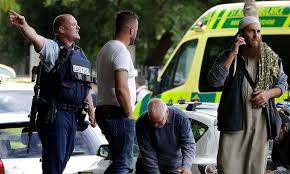 A gunman opened fire on Friday prayers at a mosque in New Zealand killing many worshippers and forcing the city of Christchurch into lockdown as police launched a massive manhunt. New Zealand Police said death toll has increased to 49. Australian Prime Minister Scott Morrison has said that the gunman is a citizen of his country. He also called the shooter an “extremist, right-wing, violent terrorist”.

Reuters was unable to confirm the authenticity of the footage.

“This is one of New Zealand’s darkest days,” said Prime Minister Jacinda Ardern. “Clearly what has happened here is an extraordinary and unprecedented act of violence.”

Neither Ardern nor police gave a casualty toll.

Witnesses told media that a man dressed in a military-style, camouflage outfit, and carrying an automatic rifle had started randomly shooting people in the Al Noor mosque.

The Bangladesh cricket team was arriving for Friday prayers when the shooting occurred but all members were safe, a team coach told Reuters.

New Zealand’s Police Commissioner Mike Bush said “as far as we know” multiple fatalities occurred at two mosques. Police had one person in custody but they were not sure if others were involved, and people should stay away from mosques.

Police said earlier they were hunting “an active shooter” in the centre of Christchurch city.

“A serious and evolving situation is occurring in Christchurch with an active shooter,” New Zealand Police Commissioner Mike Bush said.

“Police are responding with its full capability to manage the situation, but the risk environment remains extremely high.”

The online video footage appeared to have been captured on a camera strapped to the gunman’s head.