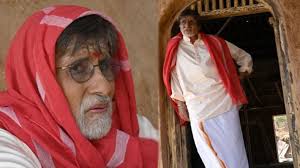 We had told you Amitabh Bachchan was going to make his debut in Kollywood with Uyarndha Manithan, directed by Tamizhvaanan of Kalvanin Kaadhali fame. The announcement came in as a surprise towards the end of 2018 and the makers had released the Bollywood superstar’s look from the film last month. But now it looks like all is not well with the team.

Rumour mills are abuzz that the project has been dropped as producer Suresh Kannan and Amitabh Bachchan had some differences of opinion. A source close to the unit tells indianexpress.com, “The shooting has been postponed due to unknown reasons. But SJ Suryah is trying his best to make things smooth. Bachchan sir already shot for a couple of days, and had a great time. It is not shelved yet.”

SJ Suryah had shared a message, which was posted on his PR’s Twitter handle.

He wrote, “There’s a small issue between the production company and Big B saab. I will sort it out and take it forward.” The post further confirmed Suryah would fly to Mumbai post-Monster’s release to meet Amitabh Bachchan.

Last month, on Twitter, Amitabh Bachchan had uploaded a photo with his co-star SJ Suryah, calling himself a disciple of the legendary actor Sivaji Ganesan.Speaking at the launch of Uyarndha Manithan, Suryah said Bachchan had given a call sheet of 35 days to complete his portions in a single stretch. Going by the pictures circulating on the Internet, we could sense Big B plays a character based out of the countryside.

The title of the Hindi version of Uyarndha Manithan is The Great Man. While the members of the cast are yet to be officially announced, the makers were in talks with Jyotika and Ramya Krishnan.

Uyarndha Manithan was supposed to be produced by Thiruchendur Murugan Productions in association with Five Elements pictures, but eventually Purple Bull International Private Limited and T-Series decided to bankroll it.