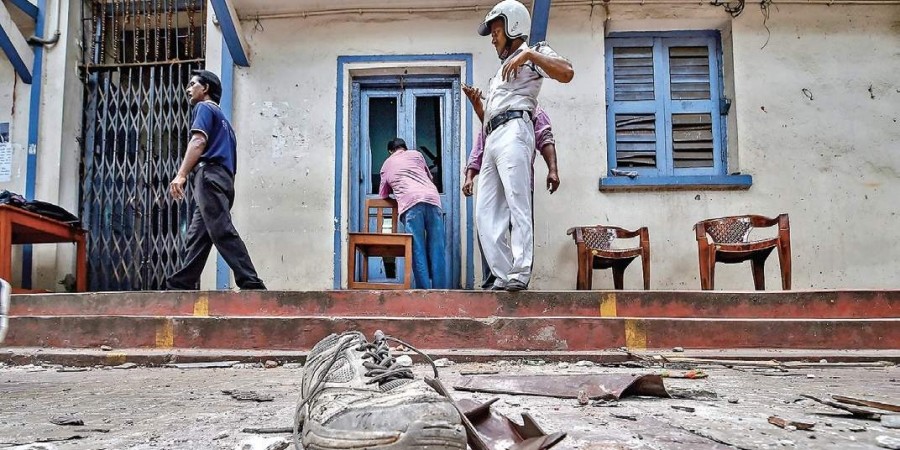 The New Indian Express : May 17, 2019, 12:27 PM
Responding to Prime Minister Narendra Modi’s remark on Thursday that he will have a new statue of Ishwar Chandra Vidyasagar installed at the same spot where his smashed bust stood, West Bengal Chief Minister Mamata Banerjee said she will ensure that the broken pieces are kept at the same spot as a symbol of the “vandalism by fascists”.Addressing a rally in Mathurapur, Mamata said, “Modi is accusing us of breaking the bust. We have the evidence and will put him behind bars. We’ll make him hold his ears and squat one lakh times.”
Hitting back at her at a rally in UP’s Mau, Modi said, “Vidyasagar’s bust was kept inside a locked room. It was broken by Trinamool vandals. The Bengal government is destroying evidence in the same way it did in the Saradha and Narada cases.”
Meanwhile, even as Mamata and Modi traded charges over the violence and vandalism during the BJP chief’s roadshow, opposition parties rallied around the Bengal CM.
Throwing their weight behind Mamata, top opposition leaders, including Bahujan Samaj Party supremo Mayawati, Andhra CM N Chandra Babu Naidu, Delhi CM Arvind Kejriwal and Samajwadi Party chief Akhilesh Yadav lashed out at the Election Commission for cutting the Bengal poll campaign short.
They said the move smacked of bias and was aimed at helping the BJP in the state.
The Kolkata Police on Thursday submitted a report on the clash to the poll panel and also set up a Special Investigation Team (SIT) to probe the vandalism at Vidyasagar College.