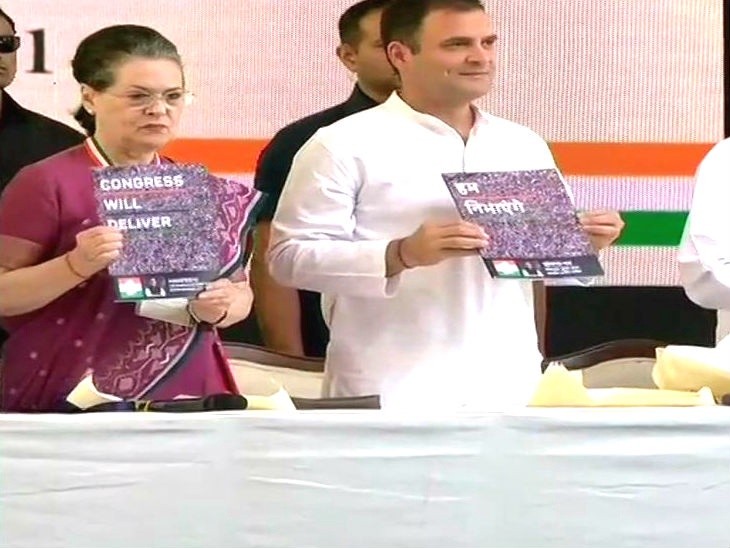 Releasing the document, Rahul Gandhi said, “When we started this process about a year back, I spoke to Mr Chidamabaram, Mr Gowda & gave two instructions. I said this is not a manifesto to be made in closed rooms but this should reflect the wishes of the people of India.”

“I also said that whatever is going to be in this manifesto has to be truthful, I do not want a single thing in this manifesto that is a lie because we have been hearing large number of lies spoken every day by our Prime Minister,” Rahul Gandhi added.

Apart from NYAY scheme, here are the top 10 poll promises made by the Congress on Tuesday. Click to read full manifesto.

‘Our pledge is jobs, jobs, jobs’ Congress will fill all 4 lakh Central Government and institutional vacancies before March 2020. Create an estimated 10 lakh seva mitra positions in every gram panchayat and urban local body. Exempt new businesses from applicable laws and regulations (except Minimum Wages Act and tax laws) for a period of 3 years.

‘Everything can wait but not agriculture’ Debt is a civil liability and we will not allow criminal proceedings to be instituted against a farmer who is unable to pay his/her debt. In order to ensure priority to the issues affecting the agriculture sector, we will present a separate “Kisan Budget.”

‘End to tax terrorism’  Congress promises to review and replace the current GST laws with the GST 2.0 regime that will truly reflect the intent and purpose of a non-cascading, value-added, indirect tax.

‘India’s borders must be secure’ Congress promises to formulate and implement a policy of compensation to the families of martyrs. Will also allow Armed Forces personnel who retire before the age of 40 years to enter the Central Armed Police Forces at suitable levels.

‘CAPF is our first line of defence’ Congress promises to ensure increased representation of women to achieve a minimum of 33 per cent in the force strength of CISF, CRPF and BSF.

‘Will enforce anti-corruption laws without discrimination’ Congress will cause to be investigated several deals entered into by the BJP Government in the last 5 years and, in particular, the Rafale deal.

‘Congress promises to enhance infrastructure in rural areas’ Increase the guaranteed days of employment up to 150 days in cases where 100 days have been achieved in a block/district. Use MGNREGA labour in the Waterbodies Restoration Mission and the Wasteland Regeneration Mission; and Use MGNREGA funds to build public assets such as primary health centres, classrooms, libraries etc.

‘We promise to protect the integrity of the judiciary’ Congress promises to fix the retirement age of judges of High Courts and the Supreme Court at 65 years. The retirement age for judicial members in Commissions and Tribunals shall also be 65 years.