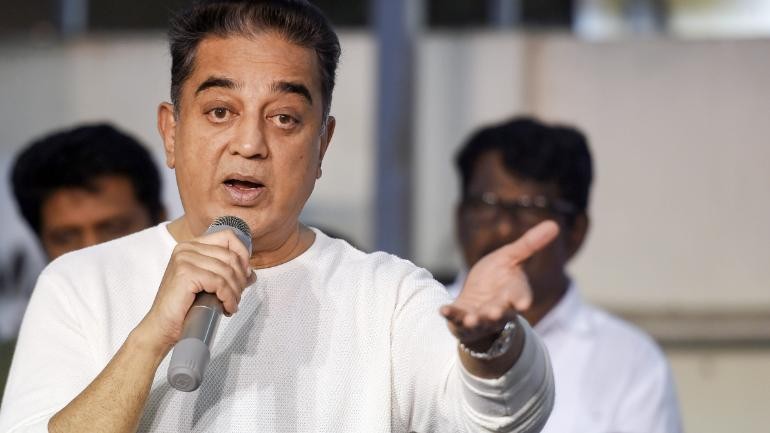 Two men were arrested for throwing eggs and pelting stones at Kamal Haasan during a public meeting in Aravakurichi on Thursday. The MNM chief escaped unhurt.

Kamal began the final leg of campaign in Aravakurichi assembly constituency on Thursday. After canvassing, he was attending a public meeting at Velayuthampalayam in Karur.

Soon after he finished his speech, two men threw eggs and pelted stones while he was getting down from the stage.

Luckily, it fell short. The MNM cadre immediately caught hold of the men and started beating them. The police present on the spot rescued the duo and took them under custody.

Sources suspect that the men might be Hindu Munnani members, who were earlier denied permission from protesting against Kamal Hassan in Velayuthampalayam.

Later, lyricist Snehan along with MNM members staged a protest demanding action against those who threw eggs at Kamal.

After Karur SP Vikraman promised to take action, the withdrew the protest. One of the arrested was identified as Ramachandran of Thalavapalayam.

Meanwhile, the MNM sought permission for campaign at six places in Sulur on Friday, but the police denied it, citing law & order issues.