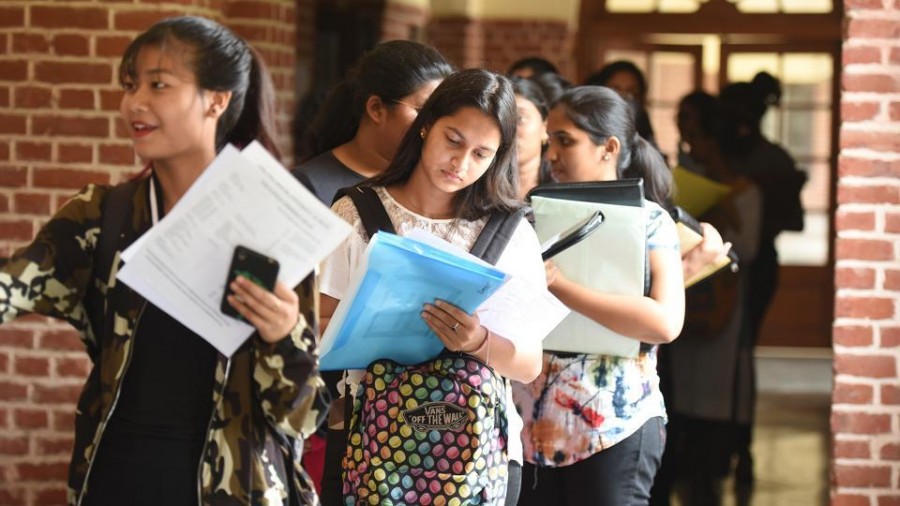 As many as 2,026 students enrolled across colleges of Delhi University (DU) on Day One of admissions Friday. The university has 62,000 undergraduate seats across 63 colleges. Despite announcing the highest cut-offs for BA (Hons) in Political Science (99%) across all courses, Hindu College filled over 72% of available seats in the course on the first day. The varsity, on Thursday night, had released the first cut-off for the 63 colleges.

Of the available 820 undergraduate seats at Hindu College, around 310 were filled on the first day. College principal Anju Srivastava said, “The response on the first day itself has been overwhelming. Despite having cut-offs like 99% in political science and 98.33% in physics, we were not expecting such a huge response.”

On Friday morning, several candidates, along with their parents and guardians were seen visiting the DU colleges throughout the day. The turnout was especially high at North Campus colleges, as well as at the South Campus Lady Shri Ram College. Despite it being a hot summer afternoon, majority of colleges had parents camping on its lawns and in its corridors, with their suitcases and bags beside them, while applicants got busy completing the admission process.

Political Science (Hons) witnessed maximum number of admissions in many of the colleges. At 99.25%, Divanshi Gupta — the state ISC topper from Uttarakhand — became one of the 31 students who took admission in Hindu College in the course.

“I want to pursue a career either in the civil services or international relations. I think the course is best suited for me,” she said. Several other students who enrolled for the course want to become civil servants.

At Lady Shri Ram (LSR) College, as many as 300 students completed the admission procedure until Friday night. The college has announced highest cut-offs for BA (Prog) and BA (Hons) in Psychology at 98.75%. This year’s class 12 all-India Central Board of Secondary Education (CBSE) topper Hansika Shukla also enrolled at LSR for BA (Hons) in Psychology.

At Miranda House, around 280 seats were filled. The college witnessed the highest enrolment in BA (Hons) in English, Political Science, BA (Programme) and Physics.

Ramjas College, which has increased the cut-offs for almost all courses this year, enrolled around 300 students on Day One. “Maximum admissions took place in Political Science and BA (Prog). In Political Science, of the available 110, 74 seats are already filled. It is unlikely that the college will take admissions in the course in the second cut-off list,” college principal Manoj Khanna said.

At Shri Ram College of Commerce (SRCC), as many as 275 seats got filled on Friday. According to its principal Simrit Kaur, 200 admissions were done in BCom (Hons) and 75 in BA (Hons) in Economics. At Kamala Nehru College (KNC), around 140 students completed the admission process Friday. Of them, maximum were for BA (Hons) in Sociology and Geography. At Gargi College, as many as 250 seats got filled.

Many students had travelled a long way for admissions. Tanupriya, whose father is a head constable with the Jammu & Kashmir Police, said she arrived in Delhi on Friday morning with her family after a 12-hour bus journey and rested in a gurdwara before proceeding to SRCC.

With 94.5% marks, she is among the four candidates selected for admissions to SRCC under the Prime Minister’s Special Scholarship Scheme for J&K students. “No one from our family has studied in DU. I wish to join the Indian Economic Service and make my family proud,” Tanupriya, who took admissions in BA Economics(Hons), said.