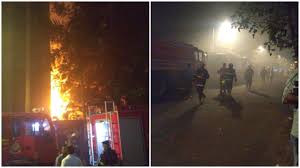 A fire broke out at a Big Bazaar outlet situated in Mumbai's Matunga West. As per a PTI report, at least five fire engines, a Quick Response Vehicle, one ambulance and police officials have been rushed to the spot to control the matter. The report further stated that all the people who were inside the store at the time of the incident managed to escape safely. Fire brigade personnel faced a very difficult situation.

CFO Prabhat Rahangdale said, “Compound wall between Big Bazaar and Pam House Society is being demolished to get access. The extension by Big Bazaar till the compound wall – which is used as godown – prima facie seems to be illegal.”The said extended godown was packed with materials, he said. “Fire brigade personnel faced a very difficult and dangerous situation as huge explosions occurred during fire fighting,” Pahangdale added.

“Necessary actions will be initiated by the ward and fire brigade against owner of Big Bazaar and the Mill owner,” he said.

The cause of the fire is yet to be ascertained.