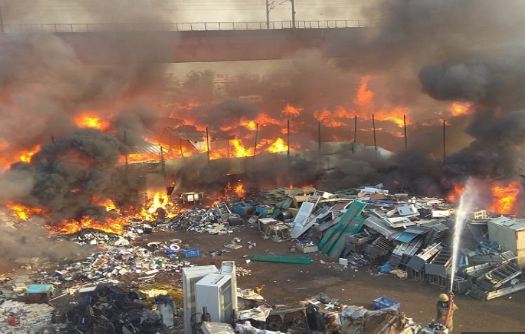 Smoke from a fire at a furniture market, which has been doused, has drifted inside the Magenta Line of the Delhi Metro network in south-east Delhi, the public transporter tweeted this morning.

"Train movement has been stopped temporarily between Jasola Vihar Shaheen Bagh and Kalindi Kunj due to smoke and fire from a fire underneath the section. We regret the inconvenience," the Delhi Metro Rail Corporation (DMRC) tweeted.

Jasola Vihar, Shaheen Bagh and Kalindi Kunj are in south-east Delhi and all these three stations come one after another.

"Short loops are being run between Janakpuri West and Jasola Vihar Shaheen Bagh. No service between Kalindi Kunj and Botanical Garden temporarily," the DMRC said.

Seventeen fire trucks were rushed to control the blaze at the furniture market near Kalindi Kunj Metro station, officials said. No one was injured, they said.

"The fire was reported at 5.55 am, and 17 fire trucks were immediately rushed to the spot," said Delhi Fire Services Director Atul Garg, according to news agency IANS.