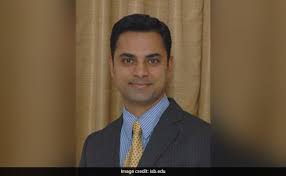 Batting for consolidation in public sector banks, Chief Economic Advisor Krishnamurthy V Subramanian has said that having a few good banks is a good idea as they can compete and their quality can get enhanced to compete globally with the best in the world.

"Having a few large Indian banks is a good idea. By encouraging some of our healthy banks to become big and thereby tap into savings elsewhere, it will be a positive thing. We should have a few banks who can compete. By this the quality of those banks gets enhanced as they compete globally with the best in the world," he told news agency IANS in an interview.

He said a global bank benefits from savings across the world. Chinese and European banks are very large, there are benefits they derive from economies of scale, which reduces their costs. American and Chinese banks benefit from global savings.

The Ministry of Finance has been saying that India needs fewer and mega banks. It had earlier called for further consolidation of India's banking industry, saying the country needs fewer, stronger mega lenders to exploit economies of scale.

The reasoning of the NDA government behind such consolidation has been to drive synergies, reducing duplication and generate savings.

Taking that line of action forward, state-run Bank of Baroda became India's third largest bank after its merger with Dena Bank and Vijaya Bank came into effect from April 1, 2019, beating the private sector lender ICICI Bank. With a total business of about Rs. 15 trillion, the merged entity is the third-largest lender in India, after State Bank of India (SBI) and HDFC Bank.

Bank of Baroda now ranks second in India across all banks. The merged entity has nearly 9,500 branches as Dena Bank and Vijaya Bank will help Bank of Baroda increase its reach in the western, southern and north-eastern regions.

Before that in 2017, five associates and the Bharatiya Mahila Bank became part of the SBI catapulting the country's largest lender to among the top 50 banks in the world.

With this merger, the bank had joined the league of top 50 banks globally in terms of assets. The total customer base of the bank will reach 37 crore with a branch network of around 24,000 and nearly 59,000 ATMs across the country.

The merged entity had a deposit base of more than Rs. 26 lakh crore and advances level of Rs.18.50 lakh crore.