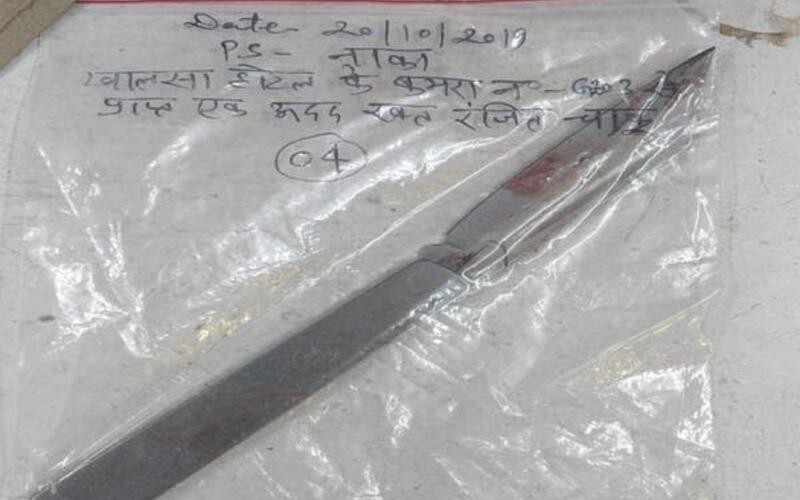 Police said the alleged assailants checked into the room after reaching Lucknow from Gujarat on October 17, and after killing Tiwari, left without informing the hotel staff. Police sealed the room and collected footage from the hotel’s CCTV camera network. Forensic experts collected the bloodstained clothes and a towel from the room, and lifted fingerprints.

Police said the men seen in the hotel footage were the same as the ones in the footage from near Tiwari’s residence.

“The two sets of footage were matched and efforts are being made to arrest the assailants. We have found a bloodstained knife from the room of the hotel,” Additional Director General of Police, Lucknow Zone, Satya Narain Sabat said.

Tiwari, a former working president of the Akhil Bharat Hindu Mahasabha, was murdered by two assailants at his home around noon on October 18. Tiwari had appealed on behalf of the organisation in the Ayodhya case before the Supreme Court.

Police said they had rushed to the hotel after its staff informed them on Saturday evening about the presence of bloodstained clothes in a room that had been occupied by two youths.

“We found bloodstained clothes (kurtas) and a towel lying on the bed. We also recovered an empty box of a cellphone, a shaving kit, an empty spectacle case, and two empty bags from the room,” a police officer said.

According to the police, hotel records showed the two persons had identified themselves as Sheikh Ashfaq Hussain and Pathan Moinudddin Ahmed, residents of Surat in Gujarat. They had checked into the ground floor room at 11.08 pm on October 17, police said.

The CCTV footage showed the men leaving the hotel at 10.38 am on October 18, and returning at 1.21 pm. “Both stayed in the hotel for around 16 minutes, and left after telling the hotel staff that they would return soon,” an officer said.

When the men did not return for more than 24 hours, the hotel staff opened the room with a duplicate key on October 19 evening, and found the knife and the bloodstained clothes.

“The bloodstained clothes recovered from the hotel room would be sent to the laboratory for examination by the investigating officer,” Senior Superintendent of Police, Lucknow, Kalanidhi Naithani, said.

Police sources in Surat said the alleged killers had been in touch with Tiwari for about a month before the murder. They allegedly used fake names, and told Tiwari that they would visit him in UP on Friday afternoon.

Early on Saturday, the Surat Crime Branch had arrested three men — Rashid Pathan, Faizan Shaikh, and Maulana Mohsin Shaikh — for alleged involvement in Tiwari’s murder. According to police, the three men, all of whom are in their early 20s, have confessed to the Surat Crime Branch and the Gujarat Anti-Terrorism Squad about their involvement in the conspiracy to kill Tiwari.

The three men were produced before a court in Ahmedabad on Sunday. Gujarat ATS DSP K K Patel said: “The court has granted three days’ transit remand to UP Police.” The accused would be taken to Lucknow on Monday, sources said.

Police sources in Surat claimed that Rashid provided the funds, and Faizan purchased sweets from Dharti Namkeen sweet shop on Road No. 3 in Udhna. Mohsin Shaikh was allegedly the ideologue who brainwashed the members of the group. It was a box of a local sweet called ghari that the alleged killers left behind in Tiwari’s home, which led investigators to the three arrested men.

Sources in Surat police said members of the group often met for tea at night in Surat’s Zampabazaar area, around 6 km from Limbayat, where Faizan was picked up. Through Faizan, police reached Rashid Pathan and his brother Saeed Pathan, and ultimately Mohsin Shaikh. According to Surat police sources, the members of the group discussed revenge for some disparaging comments about the Prophet that Tiwari made in 2015.

These sources said that two members of the group established contact with Tiwari, giving him fake Hindu names. They spoke to him by phone on more than six occasions, the sources said, and told him that they wanted to recruit members for Tiwari’s Hindu Samaj Party in Surat. A few days ago, they allegedly rang Tiwari and told him that they were coming to Lucknow, and Tiwari welcomed them.

According to police sources in Gujarat, the alleged killers boarded the Valsad-Kanpur Central Udhyogkarmi Express at Udhna on October 16 night, and reached Kanpur the following night. They allegedly travelled to Lucknow by road, and booked themselves into a hotel near Tiwari’s residence. On Friday, they allegedly dressed in saffron clothes and went to meet Tiwari.

Also on Sunday meanwhile, members of Tiwari’s family, including his mother Kusum Tiwari, wife Kiran Tiwari, and eldest son Satyam Tiwari, met Chief Minister Yogi Adityanath at his residence. The family claimed that Adityanath had promised to fulfill their demands, which include a house and government job for one member of the family.

“We stayed with the chief minister for around half an hour. We demanded that the assailants be given the death penalty,” Satyam Tiwari said.

However, Kusum Tiwari told reporters that she was not satisfied with the CM’s response, and would “pick up a sword” if she did not get justice. She accused the police of forcibly taking the family to meet Adityanath, even though religious customs forbid them from moving out of home during the 13-day period of mourning.

Satyam Tiwari insisted that “my family is satisfied after meeting the chief minister”. He said he did not know what his grandmother had told reporters, and that there was “some confusion”.

Congress state president Ajay Kumar Lallu and Congress Legislature Party leader Aradhna Mishra met the family in Sitapur on Sunday. They offered condolences and assured the family that the party would fight for justice, a spokesperson for the Congress said. The state president said the family had told him that they were not satisfied with the way the government was going about handling the case. 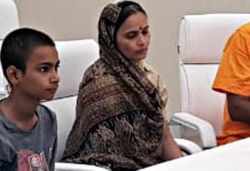 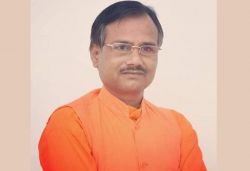 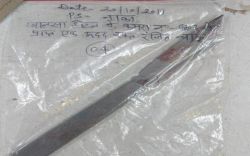 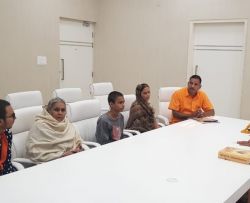