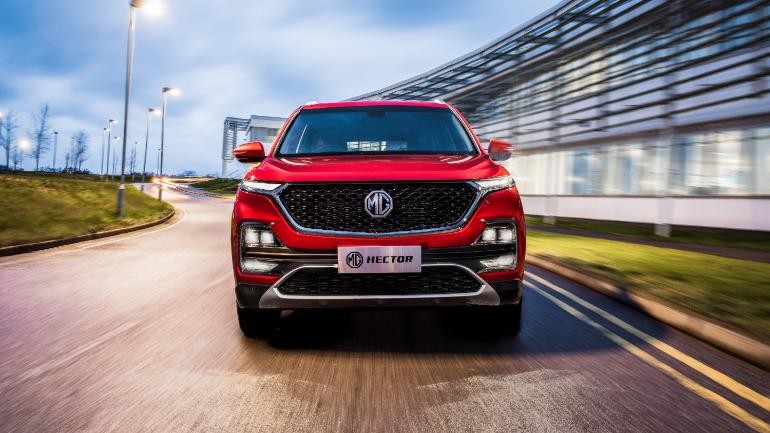 MG Hector is all set to be unveiled in India on May 15 with the launch slated to take place in the following month. This upcoming SUV from Morris Garages will be the iconic British brand's first product in India. The production of MG Hector, involving over 75 per cent local elements, has already commenced at the company's Halol manufacturing plant.

There have been reports claiming that MG Hector bookings will start in the second half of May. The upcoming SUV is expected to give a stiff competition to rivals like Tata Harrier, Jeep Compass and Mahindra XUV500. It might be priced in the range of Rs 16 lakh (ex-showroom) and Rs 20 lakh (ex-showroom).

MG Hector will have a length of 4,655 mm. Its width and height will be 1,835 mm and 1,760 mm, respectively. The wheelbase will measure 2,750 mm. While Hector might be based on China-spec Baojun 530, major tweaks are expected in it to suit the Indian conditions.So far as exteriors of Hector are concerned, the upcoming SUV will feature a bold grille with 'MG' badge in the middle. There will be features like split headlamps with LED DRLs. Multi-spoke alloy wheels, roof rails and a panoramic sunroof will add to its styling. There will be LED taillamps also. MG Hector's USP might be its interiors. Apart from plush seat upholstery, it will have a modern connectivity feature called iSMART Next Gen. There will be a 10.4-inch head unit with entertainment content.

While the engine details of the new MG Hector are not out yet, we are expecting it to get a 1.5-litre petrol engine. It will also get a 2.0-litre diesel engine, which comes with Jeep Compass. Apart from a standard 6-speed manual gearbox, there might be a DCT with the petrol option.British actor Benedict Cumberbatch has been roped in by MG Motor India as its brand ambassador and several TV commercials featuring MG Hector and the film personality are already out.