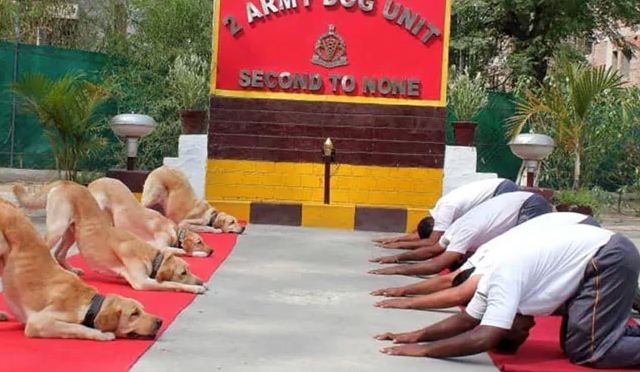 "Today, their negativity was seen in their clear support to the medieval practice of Triple Talaq. Now, they mock Yoga Day and insult our forces (yet again!)," Mr Shah tweeted.

"With due respect to you, Rahul Gandhi Ji, these are proud members of the Indian Army and they contribute to the safety of our nation," he tweeted.

The photos of the dog unit practicing yoga were originally shared by the official handle of the Defence spokesperson.

After the tweet, "dogs" started to trend on Twitter and Mr Gandhi's tweet got over 17,000 likes. However, most seemed clueless what the Congress lawmaker meant. Many were offended.

The dog squad of the Border Security Force (BSF) was seen performing along with their trainers in Jammu.

The theme of this year's Yoga Day is "Climate Action." Prime Minister Narendra Modi, during his first address at the United Nations General Assembly in 2014, had proposed to mark June 21 as the International Day of Yoga, which was unanimously accepted by the member countries.