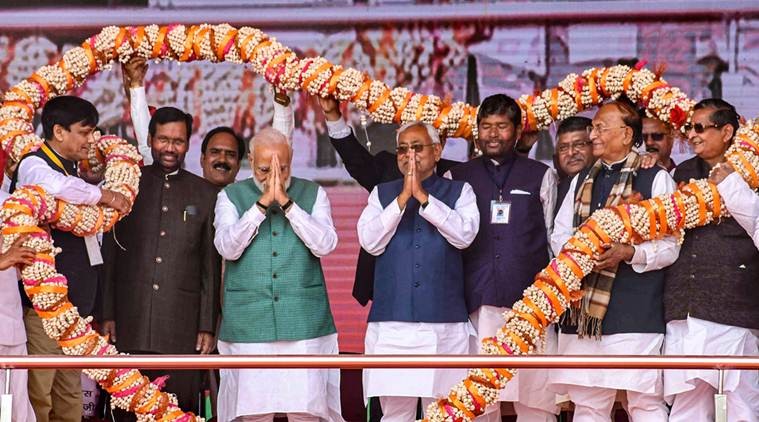 Sharing the dais with Bihar Chief Minister Nitish Kumar at Patna’s historic Gandhi Maidan, Prime Minister Narendra Modi on Sunday mounted a strong attack on the Opposition for questioning the airstrike in Balakot, saying such remarks were made to please Pakistan.

While much of Modi’s address centered around the IAF’s offensive on terror camps in Pakistan, he also said that the Centre would ensure that all sections in the state had access to the best of facilities.

“At a time when our armed forces are fighting enemies across the border and within India, some people are making statements to please Pakistan. This is New India, it does not remain silent on killings of its jawans,” Modi said.\

Accusing the Opposition parties of “conspiring” against him, the prime minister said Congress and its allies were demoralizing the forces by demanding evidence of strikes on a Jaish-e-Mohammad training camp in Pakistan’s Balakot.

“When the country needed to speak in one voice, 21 opposition parties gathered in Delhi to adopt a resolution condemning us. They are demanding proof from the armed forces for their act of bravery,” Modi said.

His remarks were in reference to a meeting of 21 Opposition parties last week, where they expressed anguish over the “blatant politicization” of the sacrifices of armed forces by the “ruling party”.