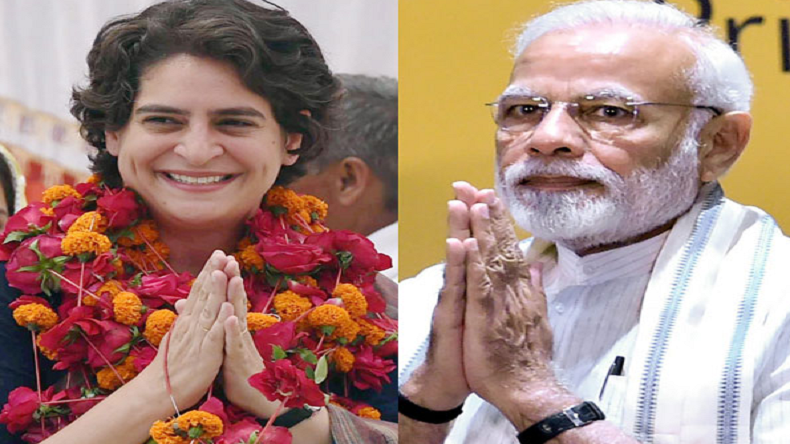 On the last day of the 2019 election campaign, Congress general secretary Priyanka Gandhi Vadra spoke to Sunetra Choudhury about the big controversies of the day, her political debut, and the possibility of seeking election to the Lok Sabha. Edited excerpts:

What is your reaction to the Prime Minister’s remark today that he can’t forgive the remark by Pragya Thakur that Mahatma Gandhi’s assassin Nathuram Godse was a patriot?

It’s a cop-out. You are the Prime Minister of the country, there is a question of somebody stating that the person who killed the founder of this country and created its democratic foundation, is a patriot. It’s not enough to say that in your heart, you will not forgive them. You are a political leader, you have to state your political position. What is your position on the killer of Mahatma Gandhi?

I believed very firmly that my children should have as normal and simple a childhood as possible. Bringing up children in Delhi, as it is, is full of challenges.

Rahul and I grew up under the shadow of violence and loss. I did not want my children to have to face that. Often, the burden of a political career is carried by the family, especially the children. I felt I needed to protect my children from this. As it happens, recently they became keen that I should enter politics and they were quite happy that I did.

Did they say, ‘Mom you should fight’?

Yes, my son would tease me by saying, you are wasting your political skills trying to solve problems between the cook and the electrician, put them to better use! In the last couple of years, both of them were encouraging me to enter politics.

Actually, I think there were two different aspects to my deciding to be in politics. The first was that my view of myself, my life and its relationship to politics changed drastically. The second aspect was that I found myself watching silently as the BJP [Bharatiya Janata Party] was systematically destroying democratic institutions, enforcing a hate-filled political narrative and creating divisions among people for its own political advancement. I began to feel that remaining silent was cowardly. I didn’t know how to accept that cowardice.

When Rahul Gandhi became vice-president of the party he gave the ‘power is poison’ speech; what words of advice did he or your mother give you when you entered politics?

My brother’s advice was very clear. He told me that my job as a politician was to go to all those who are suffering, to find them, stand side-by-side with them, fight for them, and ensure that they had political representation in the system. My mother’s advice was that I talk too much and I should be more prudent about what I say.

Do you think that you “talked too much’’ at any point in this campaign?

Do you think the Duryodhan comment against Prime Minister Narendra Modi was too much?

Absolutely not. I said very clearly that India has a history of not forgiving arrogance that dates back to the Mahabharat and in that context I quoted a famous poem about Duryodhan. What’s wrong with that?

Did it make you angry when Mr Modi attacked your father?

Not at all, I actually find the Prime Minister funny when he attacks my father because it shows that he is weak and has run out of substantial political arguments.

If we talk about your current assignment in UP, you speak about the booth-level strengthening of the party. Is it feasible so soon? Is Priyanka Gandhi planning for 2019 or 2022?

Clearly in three months, booth-level strengthening and rebuilding an entire political organisation in a state as complex as UP is not feasible. The aim in this election is to defeat the BJP. Where our organisation is weaker, we have ensured that our candidate does not damage the alliance [Samajwadi Party and Bahujan Samaj Party]. However by 2022, it is completely feasible to build booth-level organisations though that is not the main focus of my assignment. My aim is to build representation in the party and to see to it that social groups, women and young people are adequately represented in our party. I think that is actually the deeper aspect of the task ahead of me. The booth level building of an organisation is only going to be a reflection of how well we manage to bring new life, new people and genuine ground level social, cultural and political leaders into our party.

Did you reach out to Mayawati or Akhilesh Yadav to try to salvage an alliance?

My mother spoke to Mayawati ji, my brother reached out to both of them, and Mr Scindia [Jyotiraditya Scindia, also a general secretary of the Congress] reached out to Mr Akhilesh Yadav Ji a number of times. We were open to discussing an alliance right from the beginning, simply because we wanted to defeat the BJP in UP. However, for their own political reasons and in their own wisdom, both of them were unresponsive. They probably felt that it was not a feasible proposition for them, and therefore we are fighting alone. I think we have made as good a fight of it as we could have.

Many refer to you as Indira 2, referring to your grandmother Indira Gandhi. You invoke her too,why? What is the one similarity you have with her and something that differentiates you?

I don’t think it’s fair to say that I invoke her. I speak about her when I feel it’s relevant to speak about her. Just because she is my grandmother, I cannot pretend that she does not exist. She was a prime minister of India and she did a lot of phenomenal work for the country, and as a Congresswoman it is but obvious that I should speak about her.

I think comparisons between her and me are facile. She was a fearless leader of great stature whose political journey began with the fight for India’s independence and ended with her martyrdom. How can anyone compare me with her? I just entered politics three months ago!

My grandmother was a revolutionary and a fighter, I am just a fighter. Maybe the similarity is that once we make up our minds to fight for something we believe in, we will fight to the end.

Now that the campaign is over, Rahul Gandhi will have to give up one of the two seats he contested,should he win both. You have gone to Wayanad and said my brother won’t let you down. So will you rise to the challenge in Amethi?

It’s not a challenge. The biggest challenge is for me to build the party for 2022 in Uttar Pradesh.

Will you fight in Amethi?

It will be decided when my brother decides to leave one of the seats; that discussion will happen then.