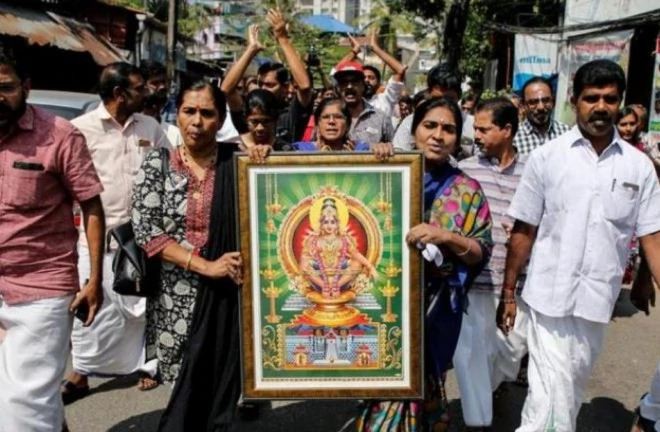 A poster at a Kerala college showing Lord Ayyappa in between the bleeding legs of a woman has sparked a row.

The poster was allegedly put up by the Students Federation of India (SFI), the student wing of the CPM, at Sree Kerala Varma College in Thrissur. The controversial poster was, however, removed by police following a written complaint by the Bharatiya Janata Party (BJP).

The controversial poster depicted an upside-down Lord Ayyappa whose face was seen between the legs of a woman. Blood dripping down the legs indicated that the woman was menstruating.

The poster, in the name of SFI, reportedly appeared on the campus as part of celebrations to welcome the new batch.

After the matter was highlighted, Congress took out a protest march to the headquarters of the Cochin Devaswom Board, which runs the college, The Times of India reported. Soon, the BJP also took up the matter and approached the police.

Lord Ayyappa is the presiding deity at Sabarimala residing in the hilly forest in Naishtik Brahmachari (eternal celibate) state. Till the Supreme Court struck down Rule 3 (b) of the Kerala Hindu Places of Public Worship (Authorisation of Entry) Rules, 1965 declaring it unconstitutional, women of menstruating age (10-50 years) were not allowed to enter the temple.