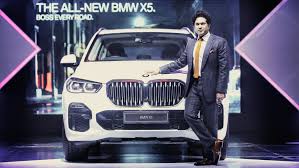 The 2019 BMW X5 is here, and it’s bigger and loaded with more gadgetry. Of course, BMW India had to have ace cricketer and brand ambassador Sachin Tendulkar do the honours of launching the 2019 BMW X5 SUV (or SAV as BMW calls it) in India.

The 2019 BMW X5 is available in three variants. Here are the prices.

Cricketer Sachin Tendulkar is the brand ambassador for BMW and has owned a few models as well such as the 7 Series, the i8 Roadster and the X5 SUV. The BMW X5 is a fairly popular SUV globally, with over 2.5 million having been sold since its launch in 1999. It has gone through four generations since then.

The X5 comes to India as a completely knocked down unit (CKD) and will be assembled at the company’s plant in Chennai.The 2019 BMW X5 gets a new platform and consequently more space on the inside. It will come with a choice of petrol and diesel engines that are BS-VI compliant.

The petrol engine is a 3-litre turbo-petrol unit that puts out 337 bhp of power and 450 Nm of torque can go from 0-100 kmph in 5.5 seconds. This variant will come a little later in the year though.

The engine that will be available immediately is the 3-litre six-cylinder diesel that puts out 262 bhp of power and 620 Nm of peak torque. It comes with an 8-speed automatic transmission and all-wheel drive, with a host of driving modes. It can go from 0-100 kmph in a claimed 6.5 seconds.

The size has increased as well. The wheelbase at 2,975 mm is about 42 mm longer than before, while it’s about 66 mm wider. It gets a bigger boot that can hold 645 litres of luggage, and continues to be a 5-seater.

It features a Parking Assistant Plus feature that controls steering, braking and acceleration automatically for parking in tight spots. It has an adaptive air-suspension that can raise or lower the vehicle as needed. It can also automatically reverse out of parking spots on command.

The BMW X5 goes up against the Mercedes GLE and Range Rover Velar in India.