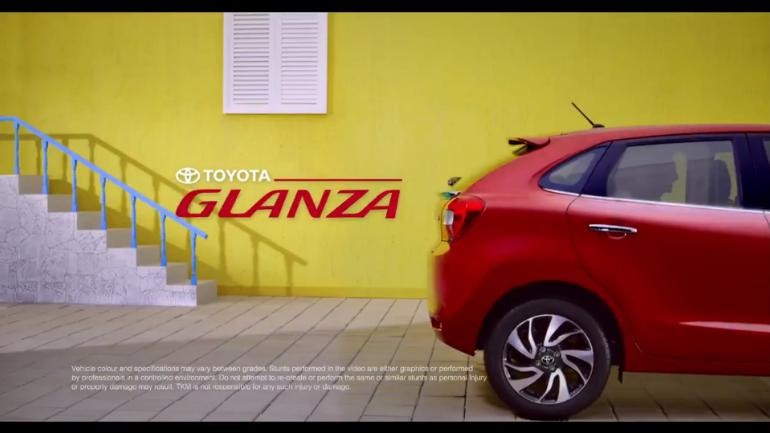 Toyota Glanza gets the alloy wheels that we now see on the recently launched 2019 Maruti Suzuki Baleno facelift. Toyota is expected to launch Glanza in India in the second half of 2019. Toyota and Suzuki had signed a memorandum of understanding towards business partnership in February 2017. Baleno will be in line with the announcement of the two companies to collaborate in new fields.

Toyota has released a teaser of Glanza and the first look shows the rear portion of the upcoming premium hatchback. From the first look, it would not be wrong to say that the design of Toyota Glanza looks exactly similar to that of Maruti Suzuki Baleno with only a single distinguishing factor, which is the Toyota badging in the alloy wheels.

Toyota Glanza gets the alloy wheels that we now see on the recently launched 2019 Maruti Suzuki Baleno facelift. The silhouette is the same and so is the C-pillar. Even the tail-lamp design looks identical. Both cars have chrome door handles. Even the rear spoilers are similar.

However, expectations are that the front fascia of Toyota Glanza will be different from that of Maruti Baleno. The grille will certainly be completely new. But there will not be any major change since it might lead to price escalation, which Toyota will definitely want to avoid. Inside the cabin, we might see plush upholstery and a touchscreen infotainment system with Android Auto and Apple CarPlay compatibility.

Toyota is expected to launch Glanza in India in the second half of 2019.

Recently, Maruti Suzuki had launched Baleno with an all-new BS-VI (BS6) compliant 1.2-litre Dualjet, Dual VVT petrol engine that gets smart hybrid technology. Also, the existing 1.2-litre VVT petrol engine of Maruti Baleno has been made BS-VI compliant. This motor produces 84 hp and 115 Nm of torque and is mated to a 5-speed manual gearbox, with an option for a CVT also. It would not be a surprise if both the engines are made available with Toyota Glanza.

Maruti Suzuki Baleno also comes with a 1.3-litre diesel engine. It produces 75 hp and 190 Nm of torque and comes mated to a 5-speed manual gearbox. On April 25, the company had hiked the prices of Baleno diesel. But Toyota is not expected to feature this diesel motor in Glanza as Maruti has decided not to upgrade it to comply with the upcoming BS-VI norms.

Toyota and Suzuki had signed a memorandum of understanding towards business partnership in February 2017. The following year, an agreement was signed between the two companies for supplying several vehicles, including hybrids, to each other for the Indian market.