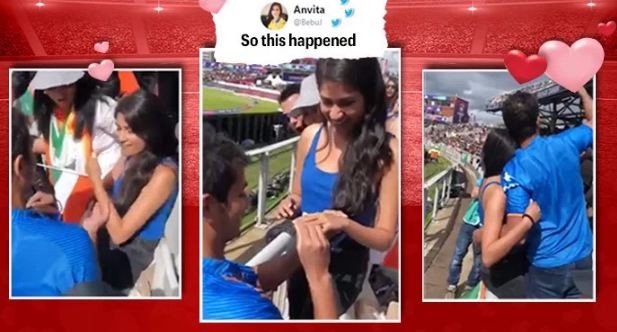 While matches between India and Pakistan tend to trigger certain emotions and feelings in cricket fans of both the countries, the recent encounter between the two teams in the ongoing ICC World Cup turned out to be a bit more special for an Indian fan.

An Indian fan, wearing a jersey, took his girlfriend by surprise when he proposed to her in front of thousands seated in the stands. A video of the incident was posted by Anvita on Twitter along with a caption that read, “So this happened.”

The video shows her boyfriend going down on his knee and presenting her with a ring. If you are wondering what happened next, Anvita promptly accepted the proposal with a “Yes”. Once shared online, it did not take long for the 45-second clip to go viral, with many congratulating the couple.

While some thanked the Indian cricket team for not “ruining” the guy’s plan, others stated that this particular “match” was fixed.