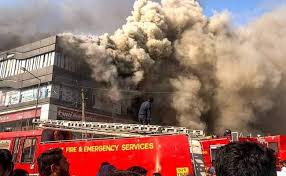 At least 19 students died and 15 were injured when a commercial complex in Surat’s Sarthana neighbourhood caught fire on Friday, Gujarat health minister Kishor Kanani said.The 15 injured had all jumped off the building to escape the fire and smoke.

The fire engulfed the second floor of the Taxshila Complex which houses a private coaching centre, the minister said. He added that the institute did not follow fire safety norms, without saying what violations it was guilty of. An inquiry has been ordered and those guilty of any wrongdoing will be punished, Kanani said.

The building housed at least four coaching centres, one of which ran summer drawing classes for children. HT couldn’t verify to which the students who died belonged.

According to the police, all those who died in the fire perished inside the building. The 15 who jumped were alive, they said.

Nineteen fire tenders and two hydraulic platforms had been pressed into service to douse the blaze, a fire services officer said, adding that the fire started on a wooden staircase on the second floor, the only means of exit from the building, forcing students to run up.

“As the fire reached the roof, it spread very fast because of the air-conditioner compressors and tyres kept there,” the officer said, requesting anonymity.

“Students on the third floor and the covered roof jumped off from the building on to the ground to save themselves from the fire and smoke. Many have been rescued and sent to a local hospital. At least 15 persons got injured. The operation to douse the fire is on,” the officer said.

The cause of the fire was not immediately known although officials suspected a short-circuit in the electrical wiring. The building has shops on the ground floor, offices on the first floor and the coaching centre on the second.

A video clip of the incident showed some students emerging from a window and jumping off as thick smoke billowed out of the building. Civilians were helping in the rescue operation to save students and occupants of the four-storey building, witnesses said.

One witness said the fire probably started inside the building and spread rapidly to other parts of the building, giving very little time to the students at the coaching centre to escape. “As the staircase caught fire the students were not able escape and got trapped,” the witness, who did not identify himself, said.

Prime Minister Narendra Modi expressed anguish over the incident and asked the state government to provide assistance to the victims and their families.

“Extremely anguished by the fire tragedy in Surat. My thoughts are with bereaved families. May the injured recover quickly. Have asked the Gujarat government and local authorities to provide all possible assistance to those affected,” Modi tweeted.

Gujarat chief minister Vijay Rupani ordered an investigation into the incident and also announced financial help of ₹4 lakh each to the families of students who died in the fire.

The government will review fire safety norms at all coaching institutes in the state, he said. Gujarat Congress leader Ahmed Patel said he was saddened by the incident and urged the authorities to ensure the best possible medical help to the injured.