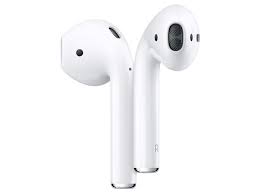 The headphones are a key way for Apple to expand revenue as it sells fewer iPhones. Sales of the smartphone over the holiday quarter were lower than expected. At the company’s shareholder meeting earlier this year, Chief Executive Officer Tim Cook noted that the company is ‘rolling the dice’ on new products and has a “long, great roadmap” of products related to the Apple Watch and AirPods.

AirPods are a key component of Apple’s growing Wearables, Home and Accessories segment, which generated more than $17 billion in revenue last year. In the fourth quarter, Apple said revenue from wearables grew 50 percent from a year earlier. The category also includes the Apple Watch and Beats headphones.

AirPods seem to have overcome any early skepticism. According to a report earlier this month by Counterpoint Research, Apple sold about 35 million pairs in 2018, accounting for almost three-fourths of the market for wireless earphones. Apple doesn’t break out revenue for the device. The original AirPods faced significant supply shortages for months after their initial launch but Apple seems to be correcting that this time around. As of Wednesday, it’s quoting ship dates for the end of March, suggesting a better supply and demand balance for the new model.