Panaji / Goa: Two MGP MLAs switch over to BJP, CM Sawant to take decision on continuing with Dhavalikar as Dy 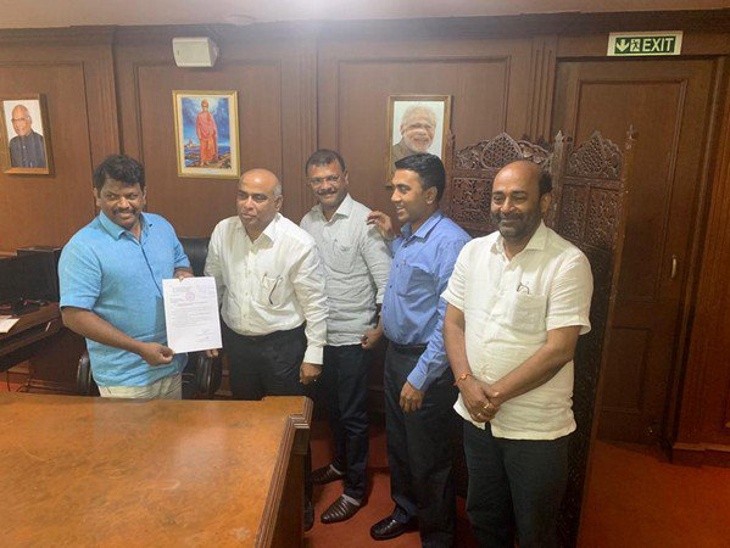 In a late night dramatic development, two MLAs from the Maharashtrawadi Gomantak Party (MGP) joined BJP. With this BJP now has the strength of 14 legislators in the house, equating Congress. Meanwhile, the prospect of MGP’s Sudin Dhavalikar remaining the deputy chief Minister remains “doubtful” and in the hands of chief minister Pramod Sawant.

Speaker Michael Lobo confirmed saying that his office was contacted by the two MLAs around 1:30 am when they walked in with a letter, and by 2 am their letters were officially accepted. “I can at this stage confirm they are now officially with the BJP. The party is expected to officially issue a statement early morning,” confirmed Lobo. The two MGP MLAs were later accompanied by Tendulkar and Chief Minister Pramod Sawant to the office of the Speaker.

“We, Manohar Ajgaonkar and Deepak Pauskar have agreed to merge with the BJP. In view of sub-clause (2) of clause 4 of the 10th Schedule, and in view of the fact that we constitute 2/3rds of the members of the legislative party, such merger shall be deemed to have taken place,” the letter submitted by Manohar Ajgaonkar read.

BJP state president Vinay Tendulkar speaking to The Indian Express said, “Sudin Dhavlikar promised late Manohar Parrikar that his party will not contest against us in the by-polls, and during the talks with Nitin Gadkari they repeated the same. Sudin’s brother Deepak continues to campaign for the by-poll elections in Shiroda, contesting against the BJP, even though they are coalition partners. We finally think this was inevitable. The two MLAs also approached us stating they want a stable government”. Goa goes for three by polls on April 23, with two seats seeing Congress defectors standing for elections. When asked if Sudin Dhavlikar will remain the deputy chief minister, speaker Lobo said “he will be dropped”, while party president said, “it’s for the chief minister to decide”

In a statement issued late night Congress Spokesperson for Goa Sunil Kawthankar said, “BJP has proved it is a threat to all its allies, this is a clear indication to all NDA partners all over country just before Lok Sabha elections that any partnership with BJP will be detrimental to the existence of their own party.”

Sudin and Deepak Dhavlikar were unable for comments.

When contacted Manohar Azgahokar said “the decision had to be taken. MGP grew as a Bahujan party and he (Sudin) is expected to take us all along. I am a Dalit and I would have respected that. Here, its become a party which bends to the needs of his brother and negative action was taken against me and the other MLA on various matters by the two. He never even had time for us and no meetings ever took place. This was the best decision we thought and I and Deepak Pauskar have now left a local party to a national party. There is trust in Modi across the country and we are sure this decision by us will only be good.”

When asked about opening office late at night, Michael Lobo said, “the speaker’s job is 24/7, when I got the call, I rushed to the Assembly complex at around 1:30 am”.

Earlier during the negotiations, the cracks in MGP was already seen when their MLAs reached out to Nitin Gadkari even as Sudin Dhavlikar continued to ask the time.

“There were efforts to topple the government. They (MGP) wanted to form a government with the Congress,” claimed Azgaonkar.

Deepak Pauskar speaking to press outside the assembly complex said,

“Both me and Babu were never called to a meeting of the central committee. We were never a part of the decision-making process in the MGP. I will be going to Raj Bhavan tomorrow (as in Wednesday). Whatever ministry I am given by the Chief Minister I will be happy with it. MGP party has split. The decision to drop will be taken, and after that there will be a swearing in.”