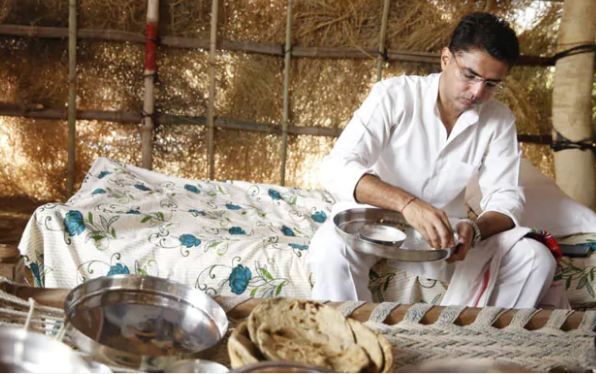 Sachin Pilot shaves by a haystack, chews on a Neem branch and sleeps on a charpoy in his outreach in one of the most rural regions of Rajasthan, where his Congress party failed to win a single seat in the national election last month.

Snapshots from the Deputy Chief Minister's two-day tour feel like a campaign that is several months late.

Jalore, Sirohi and Pali are among the most backward regions in the desert state. With two elections done back-to-back, Sachin Pilot, the state Congress chief, has launched a mass contact programme, taking his party back to the drawing board.

The national election drubbing has widened the rift between Chief Minister Ashok Gehlot and his deputy Sachin Pilot. A section of the Congress has already gone public with its call for a leadership change, clearly blaming 68-year-old Ashok Gehlot for a defeat that consumed his own son Vaibhav Gehlot, who lost from Jodhpur.

Sachin Pilot spent the night at village Kasela in Jalore.

In December, the party wrested power from the BJP. It took just five months for a complete reversal. The BJP won all 25 Lok Sabha seats; of the 200 assembly segments in the state, the Congress lost in 185. The BJP walked away with more than 50 per cent of the vote share.

The Chief Minister was accused of focusing too much on his son's campaign and neglecting every other constituency instead of delivering on his promise to win big in the Lok Sabha polls.

Ashok Gehlot is in Delhi, trying to meet with Congress president Rahul Gandhi. In Rajasthan, Sachin Pilot is already in campaign mode.

The 41-year-old goes rustic in photos and footage from his tour.

Sachin Pilot is seen eating in a barn, sleeping on a charpoy and laughing with villagers.

In between marathon meetings with officials - Sachin Pilot is the minister for Panchayati Raj - the minister did not stay in government guest houses. He spent the night at village Kasela in Jalore.

He is seen eating in a barn, sleeping on a charpoy and laughing with villagers.

"I have said as Congress president Rajasthan, we need to go back to the people, we have to have a mass contact programme. We have been given an opportunity to serve the people of Rajasthan, maybe we did not win the Lok Sabha elections; there are different reasons for that but the state government will work and serve the people, we are committed to that and that's the reason I am here today among the people," Sachin Pilot told NDTV.

His critics read many hidden messages in that statement. For one, the reassertion that for the Congress in Rajasthan, he is the man in charge.

His mass contact politics comes as the BJP accuses the Congress of causing a feeling of insecurity among the people with its leadership tussle.

The demand of a Congress lawmaker that Ashok Gehlot be removed forced party leader Avinash Pande to step in and ask lawmakers and ministers not to go public with their comments.