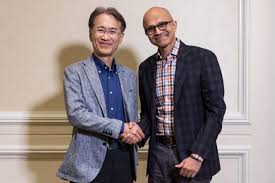 In a move to thwart upcoming competition from giants like Google and Apple, two arch gaming rivals Sony Corporation and Microsoft have joined hands to explore development of future cloud solutions in Microsoft Azure to support their respective game and content-streaming services.

In addition, the two companies will explore the use of current Microsoft Azure data centre-based solutions for Sony's game and content-streaming services, they said in a joint statement late Thursday.

The partnership is significant at a time when Google has announced its new Stadia game streaming service and Apple has announced Arcade – the world's first game subscription service for mobile and desktop.Not only this, the resurgence of Nintendo with its popular Switch and the growing PC and mobile gaming market has left Microsoft and Sony gaming consoles outdated.

According to Kenichiro Yoshida, President and CEO of Sony, PlayStation itself came about through the integration of creativity and technology."Our mission is to seamlessly evolve this platform as one that continues to deliver the best and most immersive entertainment experiences, together with a cloud environment that ensures the best possible experience, anytime, anywhere," Yoshida said in a statement.

"I believe that our joint development of future cloud solutions will contribute greatly to the advancement of interactive content," he added.

Sony and Microsoft would also explore collaboration in the areas of semiconductors and Artificial Intelligence (AI).

In terms of AI, the companies will explore incorporation of Microsoft's advanced AI platform and tools in Sony consumer products, to provide highly intuitive and user-friendly AI experiences.

"Sony has always been a leader in both entertainment and technology, and the collaboration we announced today builds on this history of innovation," said Satya Nadella, Microsoft CEO.

"Our partnership brings the power of Azure and Azure AI to Sony to deliver new gaming and entertainment experiences for customers," he added.