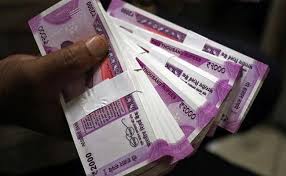 The rupee strengthened by 25 paise to 69.64 against the dollar in early trade on Tuesday, driven by sustained foreign fund inflows and weaker greenback against key rival currencies overseas. Besides, selling of dollar by exporters and banks also propelled rupee higher. The rupee opened at 69.73 against the dollar and advanced to 69.64, showing a rise of 25 paise over the previous close.

At the forex market, the rupee opened at 69.73 against the dollar and advanced to 69.64, showing a rise of 25 paise over the previous close.

In line with equities, the forex market sentiment has also been boosted by sustained fund inflows by foreign institutional investors (FIIs) in the last few sessions. FIIs bought equities worth a net Rs. 3,810.60 crore on Monday, while domestic institutional investors sold shares to the tune of Rs. 1,955.55 crore, provisional data showed. Analysts said that foreign funds poured money in domestic equity market by pricing in second term for the incumbent NDA government. Lok Sabha polls will be held over seven phases, beginning April 11, followed by counting of votes on May 23.

On Monday, the Indian currency advanced by 25 paise to close at 69.89 against the dollar.