Zoom News : Nov 29, 2022, 11:18 PM
Ashok Gehlot Vs Sachin Pilot : Congress General Secretary KC Venugopal has got political reconciliation done between Rajasthan Chief Minister Ashok Gehlot and Sachin Pilot. After the 'traitor' controversy, there was a greeting between Gehlot-Pilot in a meeting for the first time on Tuesday. After this, Venugopal first introduced both of them in a closed room, then made Gehlot-Pilot raise their hands in front of the media and said – This is Rajasthan Congress. We are completely one.

Venugopal said that Sachin Pilot and Ashok Gehlot have said that we will work unitedly not only till the yatra but till the elections. Our leader Rahul Gandhi has made it clear that both Gehlot and Pilot are assets for the party.
Pilot-Gehlot greeted each other on reaching the preparation meeting for Bharat-Jodo Yatra. Gehlot and Pilot interacted with the media together after the meeting held in the Congress war room. Gehlot said – Everyone is united in Rajasthan. Gehlot and Pilot are assets only. The same pilot said – all together will strengthen the party. No one can provoke us. The Bharat Jodo Yatra was discussed in the meeting.
Earlier, when Chief Minister Ashok Gehlot reached for the meeting, Pilot greeted him with folded hands, on which Gehlot also accepted it with folded hands. This picture was completely different from the meeting held in the same hall six days ago on 23 November. There was no discussion between the two on 23 November and the confrontation was clearly visible. 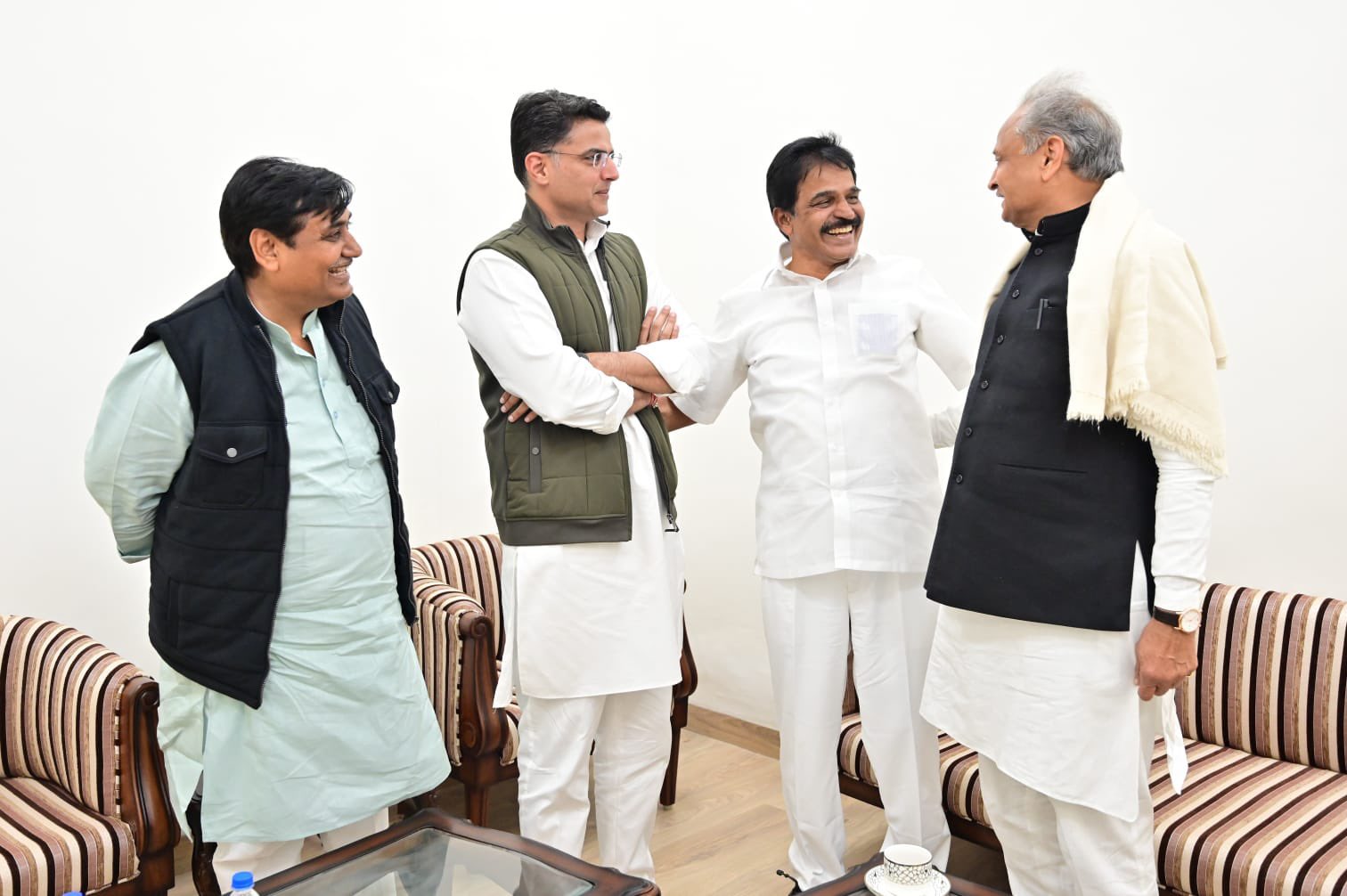 Repeated Rahul's line before the meetingBefore the meeting, CM Gehlot also repeated the line of Rahul Gandhi. Talking to the media, Gehlot said that when Rahul Gandhi has said that both the leaders are assets, they are assets. There is nothing left to say in this, after what they have said then what is the discussion about?
Gehlot said that before and after independence, the biggest feature of our party has been that the party runs under the discipline of the number one leader. There is no scope left after what he says. When Rahul Gandhi said, we are all assets.
Gehlot said – every worker is an assetGehlot said that he also meant that every worker with us is an asset. Well said. If both leaders are assets, then their followers are also assets. Together we will make the yatra successful. Next election is the main issue, we will tell that by winning. 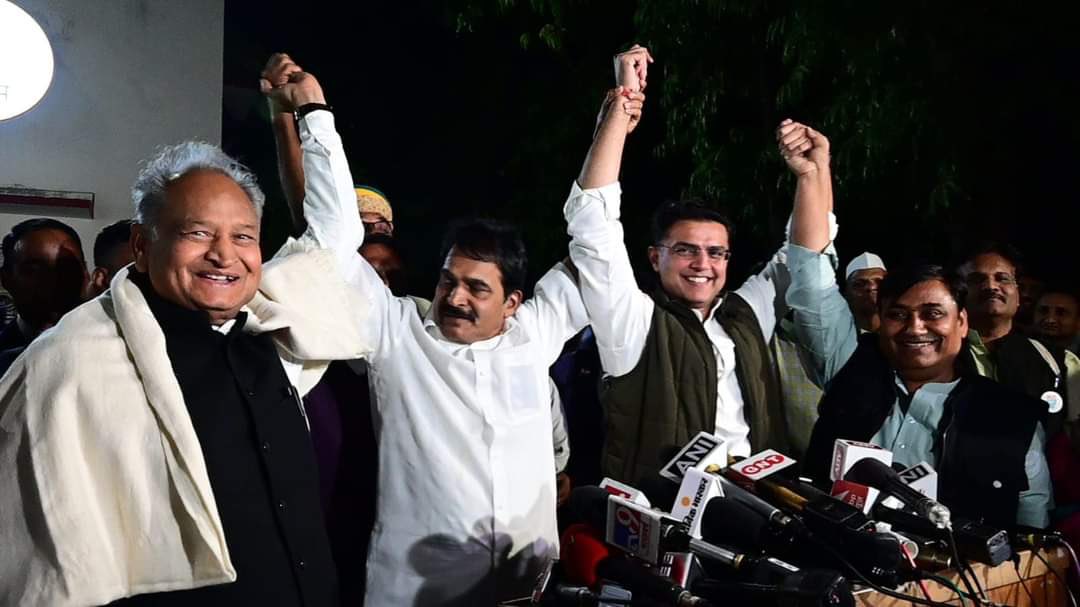 no conflict signalsIn fact, in the recently deepened dispute between Chief Minister Ashok Gehlot and former Deputy CM Sachin Pilot, now there is a possibility of 'political-ceasefire' till Rahul Gandhi's Bharat Jodo Yatra. There have been indications from the High Command that both the camps will not have any dispute till the yatra is over.
A middle way has been found to settle the controversy that started with Gehlot calling Sachin Pilot a traitor, a formula has been adopted to help both the leaders. Organization general secretary KC Venugopal is looking into the matter for Rajasthan.
Asked for a report from the state president of the leaders who made rhetoricVenugopal said on the question of action against the leaders who made statements after the advisory – Which leaders have given statements after my instructions, I have sought clarification from Congress State President Govind Singh Dotasara. There will be action.
Point to point route of 521 kilometer journey will be finalized soonThe point-to-point route plan of Rahul Gandhi's journey from Jhalawar to Alwar district covering a distance of about 521 km is likely to be finalized soon. Congress State President Govind Singh Dotasara and ministers have reviewed the entire route. The yatra will remain in Rajasthan for 18 days.
Maken stopped work, so Venugopal got the jobAfter Ajay Maken's offer to resign from the post of state in-charge, he has stopped looking after the work of Rajasthan. A parallel meeting was held on September 25 by boycotting the Legislature Party meeting. If action was not taken against the leaders responsible for this, Maken had expressed displeasure. He wrote a letter to the Congress President on 8 November offering his resignation.
Since then, Maken has stopped the work of Rajasthan in-charge. At present, no one has been given the responsibility of in-charge before the Bharat Jodo Yatra. That's why now KC Venugopal has been given the responsibility instead of in-charge. Ajay Maken is definitely a member of the steering committee formed after Kharge became the president, but he has stopped working as Rajasthan in-charge.
There was a tussle in the meeting, Gehlot called him a traitor in the interviewIn the meeting of Bharat Jodo Yatra held in the Congress War Room on November 23, the tussle between Gehlot and Pilot was clearly visible. The video of both of them staring at each other became very popular. Sachin Pilot had left just half an hour after Gehlot's arrival in this meeting. Just a day before coming to this meeting, Gehlot had given an interview in Pali, in which he had called Pilot a traitor. The interview was aired the very next day of this meeting, on which the controversy is still going on.
Meeting on December 4 just before the entry of Yatra in RajasthanA meeting of the Steering Committee under the chairmanship of Congress President Mallikarjun Kharge has been held in Delhi on December 4, just before Rahul Gandhi's entry into Rajasthan. In this, pending issues related to the party organization will be discussed. This meeting is being considered very important.

Rajasthan News / PM Narendra Modi's visit to Rajasthan today, will Gurjar community get blessings in the name of Lord Devnarayan?