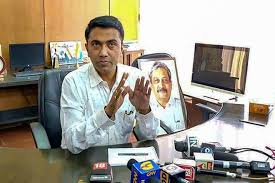 Pramod Sawant took oath as Goa CM yesterday succeeding Manohar Parrikar. His government has claimed majority with the support of 21 MLAs. The strength of the 40-member House is currently reduced to 36. The new BJP-led government in Goa will face the floor test in the state Assembly on Wednesday to prove its majority just a day after Speaker Pramod Sawant was sworn in as chief minister with an unprecedented wrangling.

The government claims majority with the support of 21 MLAs --12 from the BJP, three each of allies Goa Forward Party (GFP) and Maharashtrawadi Gomantak Party (MGP) and three Independents.

The strength of the 40-member House has been reduced to 36 following the death of Chief Minister Manohar Parrikar and BJP MLA Francis D'Souza and resignations of two Congress MLAs Subhash Shirodkar and Dayanand Sopte.