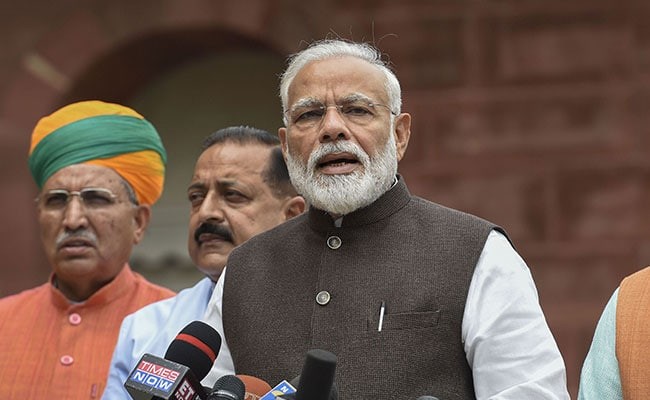 Adhir Ranjan Chowdhury, the new Lok Sabha leader of the Congress, on Monday verbally hammered the Narendra Modi government, questioning his claims that people are proud to be Indians. He also accused the government of a practice of leaving everything to the Prime Minister. "It is filled in your head that Modi Ji will do everything so you worship him," he said during the response to the "Motion of Thanks" to President's speech in parliament.

He also challenged the Prime Minister on his claims during a visit abroad that his government has made Indians -- who were ashamed of their country during the Congress rule -- proud.

"What our Modiji has conveyed the message to the world in Shanghai in 2015 - 'earlier we feel ashamed to be called Indian, now we are proud'. So do you say that Atalji (Atal Bihari Vajpayee) was not proud to be Indian?" Adhir Ranjan Chowdhury said at the Lok Sabha during the Motion of Thanks to the President.

The Prime Minister's comments had created a controversy at the time, with the hashtag #ModiInsultsIndia trending on Twitter.

Adhir Ranjan Chowdhuryalso berated the BJP lawmakers, saying, "Half of India is under drought. In Bihar more than 150 children have died due to encephalitis. And you have no concern because you all believe that we MPs do not have to do anything as Modi will do it."

He took on the BJP over its corruption allegations against the Congress and the Gandhi family. "You may keep saying 2G 3G but what have you been able to prove? You try to prove the Gandhis to be thieves but you have not been able to as they are free," he said. "Our Prime Minister is a very big salesman. We (Congress) have been unable to sell our product, that is why we lost (in the Lok Sabha election)," he said.

But even if the Congress failed to get numbers, it would do its job, he said. The party has suggested a number of "amendments" to the Presidential address. "We don't want to criticise the president but to show the government's fault,' he said.

In his address to a joint session of the House last week, President Ram Nath Kovind had outlined the government's plans over the next five years, in every field - welfare to space science.