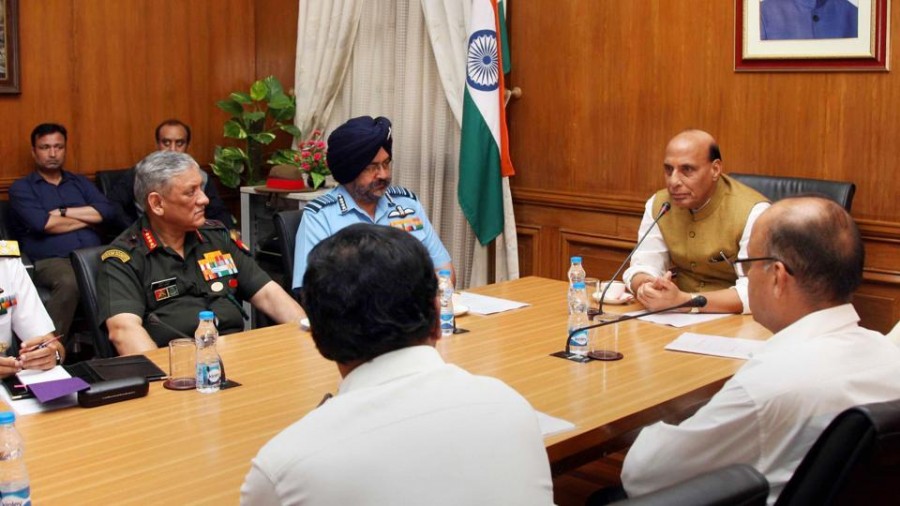 Less than 48 hours after taking over as India’s new defence minister, Rajnath Singh will on Monday visit the Siachen glacier and interact with soldiers deployed on the world’s highest battlefield, his first outstation visit in the new role, ministry officials said.

“During his visit he will interact with jawans at a forward post and pay his tributes to fallen soldiers at Siachen War Memorial. He will also interact with the jawans at the Siachen base camp,” the defence minister’s office tweeted.

Army chief General Bipin Rawat will accompany Singh who was on Saturday briefed by top officials on the functioning of the ministry. The officials said the minister would get a low-down on the security scenario in the region, apart from being briefed on the operations conducted by the army and the air force in the snowy wastes of the glacier.

The glacier, a 76-km river of slow moving ice, is of extreme strategic importance to India. Army officials say that as long as the glacier is under India’s control, the Pakistani army cannot link up with the Chinese and pose threat to the Ladakh region. It also acts as a wedge between the Shaksgam valley under China’s control and Baltistan, which is occupied by Pakistan.

“The visit by the Raksha Mantri to Siachen is rich in symbolism. While this is indeed welcome, there are many more important operational and administrative needs of the armed forces that need to be addressed urgently by the new government,” said Air Vice Marshal Manmohan Bahadur (retd), additional director general, Centre for Air Power Studies. He has flown extensively in the Siachen area as a helicopter pilot.

In October 2014, Prime Minister Narendra Modi had spent Diwali with soldiers at the base camp to boost their morale. When George Fernandes was the defence minister from 1998-2004, he paid more than 30 visits to the glacier.

Islamabad has made several demands for demilitarising the glacier invoking the aspect of long-term peace but India has always taken a cautious approach on the issue. The Indian Army launched Operation Meghdoot in April 1984 to secure the glacier after Pakistan army occupied the heights at Siachen.

Several rounds of talks between India and Pakistan on demilitarising the Siachen glacier have failed, with Islamabad refusing to authenticate troop positions on the ground.

In fact, India deployed its soldiers on Siachen after Pakistan began allowing international mountaineering expeditions to the glacier, sending out a signal that it controlled the area. Different interpretations of the 1949 ceasefire agreement by the two countries also aggravated the dispute.

India has deployed around 3,000 soldiers at Siachen where temperatures can drop to minus 60 degrees. Soldiers have to trek for almost a month, covering a stretch of 128 km, to reach some of the farthest pickets on the glacier.