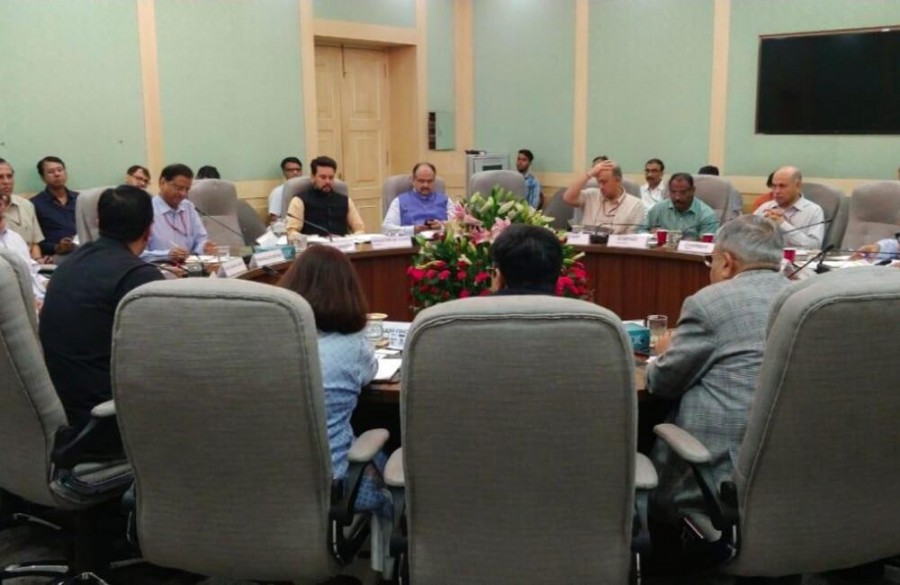 Ahead of the Budget, representatives of tech sector and industry bodies like Nasscom, IAMAI, and MAIT met Minister of State for Finance Anurag Thakur on Saturday to discuss various issues, including tax structure, and share their views on strengthening digital economy.

The pre-Budget consultation meeting also focussed on data issues such as use of Big Data technology in improving the forecasting of economic, financial, climatic etc phenomena by analysing large data sets, for providing a fillip to the SME sector and for public governance, as per an official statement.

Other issues which dominated the discussion included digital infrastructure and role of government, regulation of digital economy especially in privacy, consumer protection and financial regulation and software as service among others, the statement said.

The meeting was also attended by officials from the Finance Ministry, Electronics & IT Ministry, Department of Telecommunications, CBDT and others.

"The representatives of digital economy and startups shared their views and suggestions regarding Big Data, data mining, building of digital infrastructure as the big challenge before Indian economy besides scaling-up and incentivising Research & Development (R&D) within India. While the experts discussed the issues ailing their respective fields, they also suggested a variety of solutions to the sector specific problems," the statement said.

Development of startups and micro, small and medium enterprises (MSME) ecosystem in the country also featured in various suggestions, it added.

"We urged the government to deal with the angel tax issue urgently. In February, the government had considered Section 56 (2) of the Income Tax but notices have been served under Section 68," Internet and Mobile Association of India President Subho Ray said.

He added the association also pointed out that a CBDT paper has proposed that for foreign digital companies, their user base also be used as a factor with high weightage among parameters like assets and revenue for profit attribution.

"This, we believe, is not only unfair to foreign digital companies operating in India but fear that the same parameter could be extended to domestic players as well. In a country like India that is rapidly adopting digital platforms, such a move would be a slippery slope for growth," he said.

IT body Nasscom has urged the government to continue the tax incentives to units in special economic zones beyond March 2020, saying that such a move will provide industry with certainty and enable them to invest in long-term strategy.

Nasscom, which represents an industry that earns over $130 billion in foreign exchange, has suggested that the new tax-friendly SEZ policy should retain existing tax benefits and provide concessional rate of nine percent Minimum Alternative Tax (MAT).