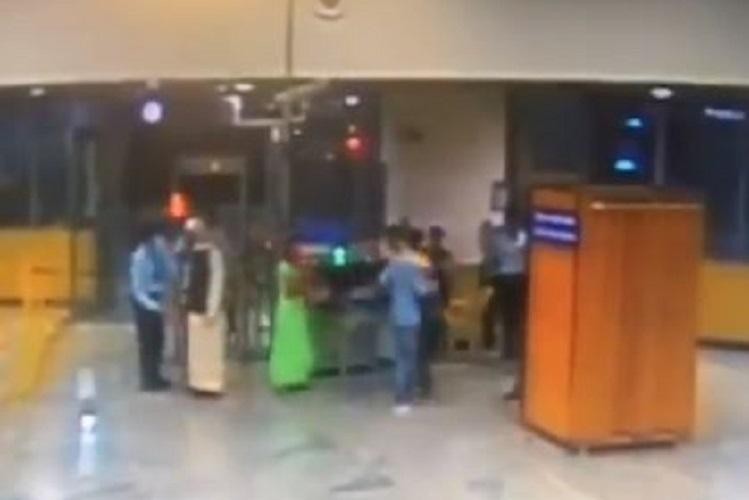 Police in Bengaluru are in search of a suspicious man who refused to be frisked at the Majestic Metro Station for the regular security check on Monday evening and also offered money to a housekeeping staff at the metro station for a “job”.

Officials said a purported device under his kurta had triggered alarm as he passed through the metal detector but he ran away. This is confirmed in the CCTV footage. But he later attempted to enter the metro station again through another entrance.

Deccan Herald quoted a source as saying, “Later, he tried to get in from another entrance but failed. When asked to open his bag there, he fled again.”

Following that, top metro officials have ordered a stricter vigil across all stations and informed the police. “We have trained security guards to contact local police immediately if they come across any suspicious objects or people,” BMRCL chief public relations officer BL Yashavanth Chavan told The Times of India.

Deccan Chronicle reported that Deputy Commissioner of Police (West) Ravi D Channannavar has deputed police search teams to locate the suspect and all angles are being probed in the case.

“We are trying to trace him. We want to know the reason behind his suspicious behaviour,” he told TOI.  However, police are also not ruling out the possibility of the man playing a prank.

The incident comes at time when the city is in a state of heightened alert in the wake of the Colombo terror attacks which killed more than 250 people. City Police Commissioner T Suneel Kumar had held a meeting last month with owners of establishments which see a daily footfall of 500 people and asked them to install CCTV cameras as well as follow other standard security protocol.

The Bengaluru airport is also on high alert since the Pulwama terror attack.