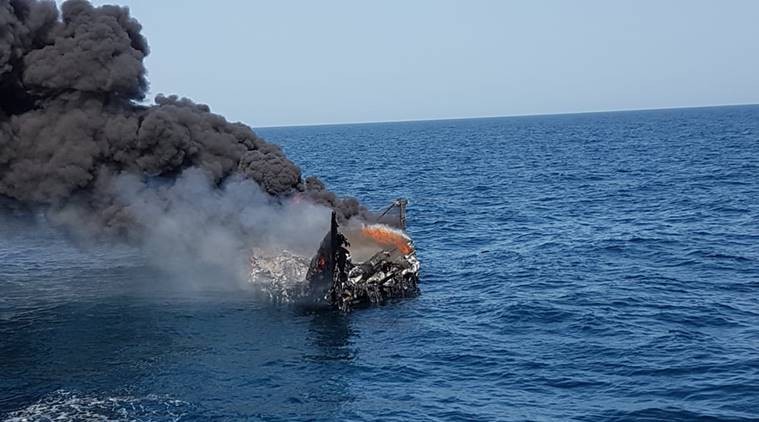 NINE IRANIAN nationals were detained and 100 kilogrammes of heroin was seized from their possession in a joint operation by the Anti-Terrorist Squad (ATS) of Gujarat and the Indian Coast Guard after intercepting their boat off Porbandar coast while they were trying to smuggle the contraband to India via the Arabian Sea, ATS said Wednesday. ATS said that the smugglers set ablaze their dhow in an attempt to destroy the narcotic drug and other evidence after being intercepted by the Indian security agencies.

ATS officers said that assistant commissioner of police of the agency had received a tip-off that an Iranian boat would attempt to smuggle heroin into Gujarat via the Arabian Sea. Officers further said that the Iranian boat was to load the heroin from Pakistan and deliver it to the receiver off Porbandar coast.

After the input, ATS contacted the Indian Coast Guard and launched a joint operation with them and the commandos of Marine Task Force. By using the Coast Guard’s fast patrol vessel boat, the three agencies conducted the joint search operation and eventually tracked down the Iranian dhow.

“We launched the operation on March 24 and eventually tracked down the suspicious dhow on the Indian side of the International Maritime Boundary Line on March 26. The Indian Coast Guard directed the suspicious boat to stop and warned that force will be used if it did not do so. But instead of stopping, the boat tried to escape. The Coast Guard then chased it and when their escape seemed impossible, the suspects set their boat ablaze. However, the Coast Guard and ATS officers boarded the suspicious boat, rescued the nine Iranian crew and also seized 100 kg of heroin on board it,” ATS chief Himanshu Shukla

ATS said that the market value of the seized consignment of heroin was around Rs 500 crore.

Shukla added that the Coast Guard tried to douse the fire on the Iranian boat but the attempt remained unsuccessful as the boat was loaded with 24,000 litres of fuel and a few gas cylinders. Eventually, officers said, the boat capsized.

The ATS chief said that the nine Iranian nationals had been brought to Porbandar. “Primary interrogation of the Iranian nationals has revealed that they had loaded the heroin consignment off the coast of Gwadar port in Pakistan and that it had been sent by one Hamid Makel, a Pakistani national. They were to deliver the contraband consignment to somebody off Gujarat coast,” Shukla further said.

He said that laboratory tests were on to ascertain the exact nature of contraband seized from the smugglers.