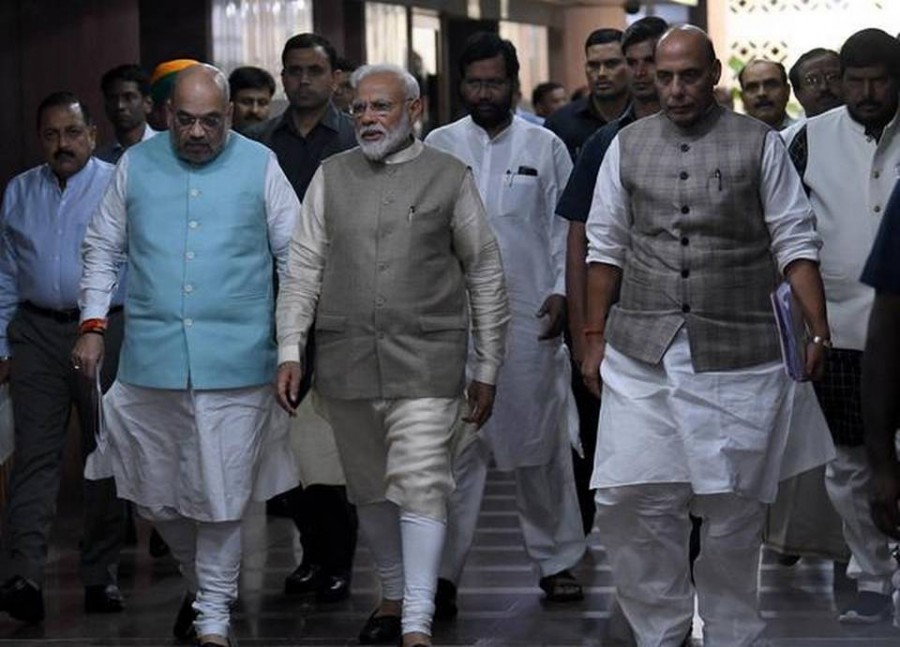 A committee will be formed by the Narendra Modi-led government to prepare a road map for “One nation, one election”, Defence Minister Rajnath Singh announced here at the end of an over four-hour meeting with presidents of 21 political parties. Eleven political parties, including the Congress, skipped the meeting convened by the Prime Minister.

Speaking to reporters at the end of the meeting, Mr. Singh said, “Majority of the parties supported. CPI and CPI (M) raised questions about its feasibility but didn’t oppose the move. The Prime Minister then said he will form a committee regarding this issue.”

All the political parties were given the opportunity to put forth their views, after which Mr. Modi spoke in support of the idea. “The Prime Minister said that this is not the government’s agenda but the country’s agenda. If there are differences of opinion, they are welcome,” Mr. Singh quoted the Prime Minister as saying.

Sources said Mr. Modi stressed that this formula needs to be accepted even if it takes 10 years to achieve synchronisation.

Other than the Congress, the notable absentees included the Trinamool Congress, the Samajwadi Party, the Bahujan Samaj Party, the Dravida Munnetra Kazhagam, the Aam Aadmi Party and Rashtriya Janata Dal among others.

The AIADMK sent Tamil Nadu Minister C.V. Shanmugam and Rajya Sabha MP Navaneethakrishnan both of whom were denied entry since the meeting was only open to the party chiefs. They submitted in writing the AIADMK’s position on the issue. Among the NDA allies, the Shiv Sena was missing.

Congress president Rahul Gandhi skipped the meeting convened by Prime Minister Modi but his party made its opposition to the proposal of simultaneous polls at a press conference by party spokesperson Gaurav Gogoi. The Congress MP argued said the proposal violate basic features of the Indian Constitution like flexibility and federalism.

But former Congress MP Milind Deora, who now heads the Mumbai Congress, said the proposal is worth a debate. In a statement he argued that “being in continuous election mode is a roadblock to good governance, distracts politicians from addressing real issues and adds populism to the character of governance”.

The CPI (M) and CPI have strongly opposed the idea. “Why were the state elections detached from the general elections? It was because of the gross misuse of article 356 of the Constitution. As long as this article remains we can’t have simultaneous elections,” CPI (M) General Secretary Sitaram Yechury told reporters. He said that his suggestion of removing Article 356 was met with silence. Simultaneous elections, Mr Yechury said will be subvert democracy. “Any suppression of will of the people by prolonging or shortening assembly or Parliament is anti-democratic and is against federalism,” he added.

According to sources, regional parties such as Biju Janata Dal, YSR Congress and Telangana Rashtriya Samiti have supported the idea.

Andhra Pradesh Chief Minister Jagan Reddy, according to sources, said that though his party in-principle agrees with the idea, he is opposed to the fixed tenure of legislatures. “If say a state government falls because of a certain exigency, you can’t prolong the government for simultaneous polls alone. So if the government falls after two years, then there should be a re-election with the new government holding power only for remaining three year period,” a top YSR Congress leader said.

Odisha Chief Minister Naveen Patnaik, who was one of the first to leave the meeting told reporters that his party supports the idea. On the other agenda of the meeting to pay tribute to father of the nation Mahatma Gandhi on his 150th birth anniversary Mr Patnaik has suggested that “ahmisa” and “non-violence” should be added to the Preamble of the Constitution.

Many other parties remained ambivalent and flagged the need for further study.

NCP’s Sharad Pawar, according to sources said that the idea is noble but it is not practical. “He said during the meeting that simultaneous election will have a lot grave implications and needs further intensive study,” a top opposition leader said.

Trinamool Congress leader Mamata Banerjee too had expressed a similar opinion in her letter to Parliamentary Affairs Minister Prahlad Joshi declining the invite. She said that this formula can’t be hurriedly implemented and there is a need for a white paper.

The Telugu Desham Party, who didn’t attend the meeting since its President Chandrababu Naidu is abroad has submitted a memorandum. The TDP has argued that “One Nation One Election” is an a serious and sensitive subject that requires much deliberation. Co-operative federalism is a key feature and the parties need to weigh in legal, political and practical aspects too before accepting it.

BSP chief Mayawati who was absent told reporters in Lucknow that holding simultaneous national and state elections "appears to be an undemocratic and unconstitutional" idea for a vast country like India. The elections she said should not be weighed from the point of view of expenditure and extravagance".