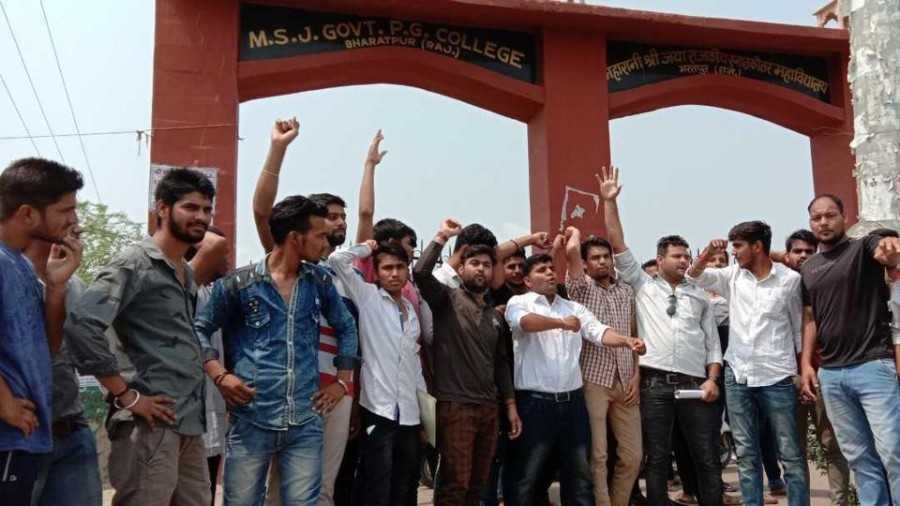 They locked entrances and started slogans against college administration to demanding open hostel for students,take land of college from encroachment from police department.

They locked the entrance and the office of vice chancellor till their demands are not fulfilled.

Members of Akhil Bhartiya Vidharthi Parishad led by president of university Dinesh Bhatra are on hunger strike continue before three days to demanding to stop the exam’s copies from contractor for examination,fulfill shortages of lecturers,the university should be shifted in its own building.

Hundreds of students protested to demanding to release lands of college from police and other departments. The land of college are being using for police pared ground,women’s station house.

They demanded to open hostel for students after release its land while college’s students have been forcing to live on rent in absence of hostels.

Students union of university Dinesh Bhatra said we have given memorandum to vice chancellor to fulfill our demands but started sit-in and burnt effigy with protest when he is not read to listen us.

Surendra Santruk said police department has been using land of college for a long time while students need hostel to living here for education.

Principal of Maharani Shri Jaya college Om Prakash Mahawar said college set up a committee to collect documents of land. The committee has forwarded its report to directorate of college education.

Rashtriya Lok Dal including jat community across country will be forced to start a fresh agitation if BJP will not take action against Trivedi.