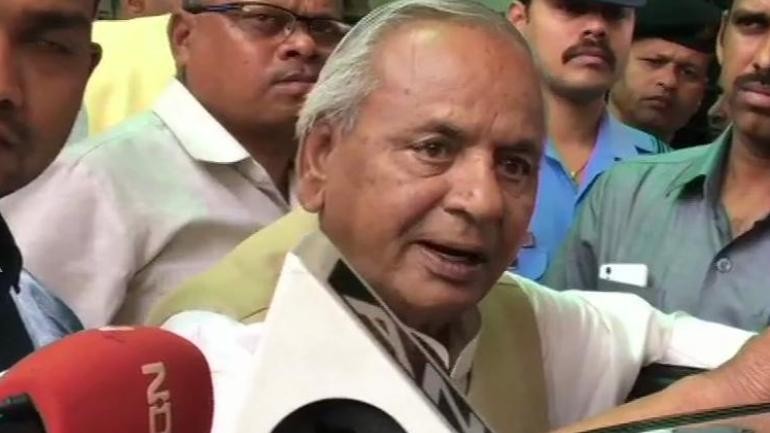 Rajasthan Governor Kalyan Singh has stoked a controversy with his comment that Narendra Modi should return as the Prime Minister.

Rajasthan Chief Minister Ashok Gehlot on Monday objected to the “unfortunate” remarks. He stated that Singh, as the Governor, should be non-partisan, and that it does not suit the dignity of his post.

A video of his comments emerged online, and was widely circulated, on Monday.

Singh made the comments in a bid to quell protests by party workers after the BJP, on March 21 (Thursday), announced sitting MP Satish Gautam’s name as candidate from Aligarh again. Gautam went to Singh’s residence, ‘Raj Palace’ on Aligarh’s Marris Road, on Friday to seek his “blessings”, but he was reportedly not given an appointment.

On Saturday, BJP workers began a protest outside Singh’s Aligarh residence since morning, gheraoed his car and set Gautam’s effigy on fire. By evening, the BJP high command communicated that its decision will not change, and the Rajasthan Governor subsequently invited Gautam and other party leaders at his residence, where they held a meeting.

Singh’ son, Etah MP Rajveer Singh, later told the media that they are all with Gautam.

Later, in a bid to assuage protesting workers, Kalyan Singh remarked that Modi should be made the PM again.

Rajasthan Chief Minister Ashok Gehlot on Monday tweeted: “Personally we have utmost respect for Shri Kalyan Singh ji…he has made [certain] political statements…. The post of Governor is a constitutional post and in a democracy, it is expected from Governors to be non-partisan and maintain distance from party politics. It is really unfortunate that Sh. Singh has made such statements which do not suit the dignity of the post he is holding.”

Deputy Chief Minister and Rajasthan Congress president Sachin Pilot stated, “We respect the office of the Governor and expect appropriate behaviour but it is unfortunate that the statement given by the Governor makes it clear that he favours a particular party.”

Raj Bhavan officials in Jaipur did not comment on the development.